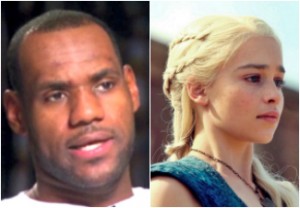 ABC gets one tonight in the form of Cavs-Warriors. Ratings will be through the roof and like nothing we’ve seen in the NBA in a long time… that’s what happens when you have the most popular player on the planet in LeBron James taking on the league MVP and already-next-big-thing in Steph Curry. But the undercurrent that may bring in more casual viewers will be the city of Cleveland itself attempting to end a drought that has seen it not win a championship in any sport in 52 years… a drought that has included some of the more heartbreaking losses you’ll ever see (Elway’s Drive, Byner’s Fumble, Jordan over Ehlo, the Tribe blowing a 9th inning lead in Game 7 of the ’97 World Series, etc). To put matters into perspective, Cleveland’s 52-year drought is seven years longer than the dubious 2nd place city (Milwaukee) and 26 years longer than Cincinnati, which sits in third.

So how will this Game 7 from Oakland rate tonight? A few factors to consider: Game of Thrones appears to be featuring its annual “war” episode (always and easily the best of each season) and that may actually end up being ABC’s biggest competition (Thrones will likely break the 10 million viewer mark… incredible for a pay-TV channel). Otherwise, it appears to be clear sailing for ABC to break some 21st Century records of its own. Preliminary prediction: Tonight’s Game 7 will be the highest rated NBA game we’ve seen since 1998… when Michael Jordan hit arguably the most memorable shot of his career in beating the Jazz late in Utah to secure his sixth (and final) NBA Championship.

Tasty nugget that somewhat helps gauge interest: A courtside seat for tonight’s game on StubHub.com just sold for $49,500.00, the highest price for a ticket ever sold on the popular site… and that includes the Super Bowl.

Despite Jordan’s heroics happening in a Game 6 in ’98 instead of a winner-take-all Game 7, NBC — which owned NBA rights at the time — saw 72 million people tune in to watch Chicago top Utah. 72 million. Context is everything, so let’s put this in Mediaite-esque terms since politics are big here: Fox News’ first Republican debate of the 2015-2016 campaign season last August shattered primary debate ratings records in bringing in 24 million viewers. The final Romney-Obama debate of the 2012 campaign scored 59.2 million viewers (the first took in 67 million). The president’s final State of the Union address was watched by 31.3 million people. Key point about the last number: That 31.3 million is the combined audience of more than a dozen networks. Last year’s World Series clincher (Royals-Mets) was watched by just 17.2 million.

So when you hear 72 million and Michael Jordan for a Game 6, just keep those other numbers in mind when trying to grasp just how huge he was and just how many casual viewers he brought in. For a more recent NBA example, the last Game 7 to be played in the Finals (Spurs-Heat in 2013) drew an audience of 26.2 million.

Of course, there’s that little issue around which to watch with Game 7 schedule to tip just after 8:00 PM EST and Thrones on at its usual 9:00 PM EST time… even to the point Time.com has a funny story out today titled “Choosing Between Game of Thrones and Game 7 of the NBA Finals is Freaking Everybody Out”. Here’s the good news: Halftime will likely come during Thrones, giving time to flip over to HBO without missing game action. If staying for the full hour, we’re talking missing maybe half of the third quarter. Not the worst scenario…

Final score prediction: Golden State 98, Cleveland 92 (Note: It’s not what I’m rooting for (how can anyone outside of Northern California root against the city — as Bill Simmons always puts it — God hates?). LeBron did the right thing in coming home. Its fans have suffered enough. No team has ever come back from a 3-1 deficit in the Finals. And James isn’t getting any younger as he starts to rack up serious miles (already eclipsing the number of total games played by Larry Bird and Magic Johnson by more than 100). The window for The King may be closing.

Reality check: Game 7s are almost always won by the home team, and tonight’s home team just happened to win more games than any other in league history (73). Too tall an order, too much history for an average team (outside of LeBron) to overcome. Final note: No road team has won a Game 7 in the Finals since Paul Ryan was eight years old (1978).