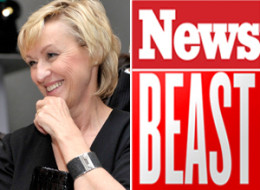 Last night the NY Observer broke the news that the on-and-off merger plans of venerable weekly Newsweek and hot-shot online property The Daily Beast was back on again. Today, all-star editor Tina Brown confirmed as much in a post published this morning on The Daily Beast that explains what the new media marraige will mean.

First of all, lots of individuals in the media analysis game seem to have a hard time wrapping their head’s around how a business that lost $20 Million last year (Newsweek) can merge with a business that is estimated to lose $10 Million a year (The Daily Beast) and have it make any business sense whatsoever. Allow me to thumbnail some basics of how this deal could conceivably work.

The truth is that The Daily Beast seems to churn out an issue’s worth of content for a print version each day, so the costs of Newsweek‘s operations (which some insiders have claimed to be still stuck in a pre-digital construct) should dissipate rather dramatically. Sadly, for many editorial staffers at Newsweek, that doesn’t spell great news. Further, despite the hand-wringing of the death of traditional publishing, advertisers in print still pay dollars to the comparative online penny. This means that, even in the leanest of times, the ad revenue for Newsweek is far more robust than that of The Daily Beast (or any online property for that matter.) Further, Ms. Brown is well regarded as someone capable of re-energizing troubled titles. She is considered to be that good.

But enough about that, allow Ms. Brown to explain the merits of the merger:

Some weddings take longer to plan than others. The union of The Daily Beast and Newsweek magazine finally took place with a coffee-mug toast between all parties Tuesday evening, in a conference room atop Beast headquarters, the IAC building on Manhattan’s West 18th Street. The final details were only hammered out last night.

What does this exciting new media marriage mean? It means that The Daily Beast’s animal high spirits will now be teamed with a legendary, weekly print magazine in a joint venture, named The Newsweek Daily Beast Company, owned equally by Barry Diller’s IAC and Sidney Harman, owner (and savior) of Newsweek. As for me, I shall now be in the editor-in-chief’s chair at both The Daily Beast and Newsweek, bringing with us as CEO my Daily Beast business partner Stephen Colvin, who launched The Week Magazine in the U.S., as well as Maxim, as president of Dennis Publishing. His dynamism has created 66 new ad campaigns for us since I persuaded him to join The Daily Beast a year ago.

It’s a wonderful new opportunity for all the brilliant editors and writers at The Daily Beast who have worked so hard to create the site’s success. Working at the warp-speed of a 24/7 news operation, we now add the versatility of being able to develop ideas and investigations that require a different narrative pace suited to the medium of print. And for Newsweek, The Daily Beast is a thriving frontline of breaking news and commentary that will raise the profile of the magazine’s bylines and quicken the pace of a great magazine’s revival. I’m impressed with how Newsweek’s outstanding staff has continued to put out a lively, well-informed magazine after the departure of their tireless editor, Jon Meacham.

Read the entire post here or the full joint press release below (image via).

50/50 Joint Venture will Merge all Newsweek Businesses and The Daily Beast’s Digital Assets; Tina Brown to Serve as Editor-in-Chief.

NEW YORK—November 12, 2010—Newsweek magazine and The Daily Beast, an operating company of IAC [NASDAQ: IACI], announced today they have agreed to merge their operations in a joint venture to be owned equally by Sidney Harman and IAC.

The new entity will be called The Newsweek Daily Beast Company. The directors of the joint venture will include Dr. Harman as Executive Chairman, IAC Chairman Barry Diller, and one director each to be appointed from either side.

Dr. Harman, who acquired Newsweek magazine from the Washington Post Co. over the summer, said: “In an admittedly challenging time, this merger provides the ideal combination of established journalism authority and bright, bristling website savvy. I like partnering with Barry Diller and I look forward to building our company with Tina Brown and Stephen Colvin.”

Sidney Harman is Founder and Chairman Emeritus of Harman International, the worldwide audio manufacturer. He served as U.S Deputy Secretary of Commerce, founded the Program on Technology, Public Policy and Human Development at Harvard University and holds a Presidential Chair at the University of Southern California where he is Professor of Polymathy. He is a trustee of the California Institute of Technology. He is the founder of the Harman Center for the Arts and of Sidney Harman Hall in Washington, D.C.

“I see Newsweek and the Beast as a marriage between Newsweek’s journalistic depth and the vibrant versatility The Daily Beast has realized on the Web,” said Ms. Brown. “The metabolism of The Daily Beast will help power the resurgence of Newsweek and Newsweek amplifies the range of talent and audience The Daily Beast can reach. The two entities together offer writers, photographers and marketers a powerful dual platform.”

“I am really excited we were able to (finally) put this together,” said Mr. Diller. “In The Daily Beast, Tina and her truly great team have in Internet-time created an hourly, daily news magazine and now will have the ability to revive the weekly venerable Newsweek with all the tools and sensibility they’ve perfected in the Beast. I’m so pleased to join with Dr. Harman in our new company. He’s such a compelling force and I’m sure he will stimulate this undertaking every day.”

Created by Tina Brown and IAC in October of 2008, The Daily Beast is a website dedicated to news and commentary, culture, and entertainment that has quickly become one of the most recognized national news brands. The two-year old business has swiftly reached an audience of nearly 5 million monthly unique visitors and has just been rated by TIME magazine this year as one of the five best news sites in the country. Prior to launching The Daily Beast, Ms. Brown made a career rejuvenating storied magazines including Tatler in the U.K., Vanity Fair, and the New Yorker.

Newsweek Magazine is an award-winning, weekly news magazine that provides comprehensive coverage of national and international affairs, business, science and technology and a rts and entertainment. It has three English-language editions overseas and six weekly local-language editions.

Since his appointment in 2009 as President of the Daily Beast, Mr. Colvin has had a significant impact in all areas of the business, including securing numerous 2010 marketing partnerships that have translated into more than 60 advertising campaigns on The Daily Beast. Previously Mr. Colvin was CEO of Dennis Publishing U.S. where he oversaw the launch of many media properties including The Week magazine and Maxim. Before joining The Daily Beast, he was Executive Vice President of CBS Interactive.

About Newsweek
Founded in 1933, Newsweek provides comprehensive coverage of national and international affairs, business, society, science and technology, and arts and entertainment. Headquartered in New York, Newsweek has bureaus located in the U.S. and around the globe. In addition to its U.S. edition, Newsweek publishes three English-language editions overseas and is the only news magazine with six weekly local-language editions—in Japan, Korea, Poland, Turkey, Pakistan and Latin America. Newsweek has global circulation of more than 2.4 million and a total readership of more than 19 million. The magazine appears in more than 190 countries.

About IAC
IAC operates more than 50 leading and diversified Internet businesses across 30 countries… our mission is to harness the power of interactivity to make daily life easier and more productive for people all over the world. To view a full list of the companies of IAC please visit our website at iac.com.

About The Daily Beast
The Daily Beast is a website dedicated to news and commentary, culture and entertainment. Created by Tina Brown and IAC, The Daily Beast curates the web’s best content and offers fresh works from its own talented roster of contributors.