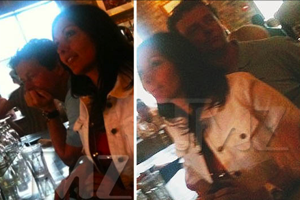 Remember Tony Hayward, the cartoonishly detached BP CEO that provided the only temporary relief (in the form of relentless mockery) from the unending agony of the BP oil disaster? He’s back, unfortunately, and he’s eating seafood. Even more scandalous, there was a pretty girl within thirty feet of him while he did it! TMZ has the Pulitzer-worthy investigation.

Gawker did the dirty work of reading TMZ to pick up on this amazing piece of bulletproof journalism: at some point during the last month, Tony Hayward visited a bar in Houston, picked out the most offensive thing on the menu (seafood), ate it with some non-alcoholic cranberry juice, and left. Somewhere along the line, this attractive woman appeared in Hayward’s proximity, which extensive (Google) research suggests is not his wife. They even found a receipt which confirms his crimes against the ocean, and his Ph.D. for some reason!

Well, first thing’s first: those pictures in no way prove that the woman in the foreground of the shot is even remotely aware of Hayward, much less that she is his lover. The receipt does say he has a guest, but it would make sense that he is working with other people on the job, and, again, that proves nothing. As sexy as the “Tony Hayward is a pimp” talking point would be, TMZ is going to have to do better than depth perception distortion during lunch time to make that story fly.

And then there’s the salacious subplot of Hayward having the gall to eat seafood when he killed our entire seafood industry. Actually, eating Gulf coast seafood is about one of the only good things Tony Hayward has been caught doing since this whole mess started, and it speaks volumes that he never even intended to make a public show of it (let’s just say PR isn’t Hayward’s forte). The seafood industry down there is in shambles, as is the restaurant and tourism industry, so in the pantheon of great moments in Tony Hayward buffoonery, this one actually contradicts his status as a heartless British prince and may actually do some good down there. Hearing that the CEO of BP, who has the money to eat anything, anywhere, at any time, thinks Gulf coast seafood is safe could give the industry a healthy bump during this downtime, and that he is spending his money at local bars instead of some high-end steakhouse deeper inland shows some personal investment in helping the American businesses his company devastated.

It is fascinating that Tony Hayward has become enough of a celebrity to be the target of such a hilariously nonexistent scandal, and even more amazing that Hayward is the kind of figure that proudly parades his flaws as badges of honor but has his good deeds scribbled into the back pages of an internet celebrity chronicle.

And one other relevant point on this piece: Tony Hayward and Paul the Psychic Octopus are now co-existing within the same news cycle. If that isn’t a clear-cut hero/villain dynamic, I don’t know what is.