The Women of The Daily Show vs. Jezebel

The Women of The Daily Show vs. Jezebel 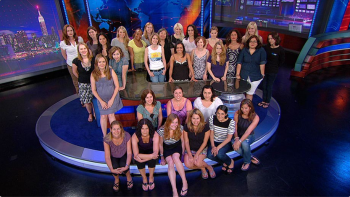 Well, I never thought I’d type those words. I must admit that I was flabbergasted earlier this week by the highly unusual “The Women of the Daily Show Speak” open letter to critics of the show’s gender parity. Besides being flabbergasted, it made me a little sad, but that’s probably just because I’m getting my period.

It made me sad because it framed the issue as an “us vs. them” issue, as though Jezebel’s interests were not aligned with those of the Daily Show‘s female employees. “Dear People Who Don’t Work Here,” the letter began, staking out a bright line between people who get it and people who don’t, people with a stake and people without.

There’s no question that Daily Show employees are best suited to comment on what it’s like to work there. And Jezebel’s Irin Carmon fired a big shot, calling the Daily Show “a boys’ club where women’s contributions are often ignored and dismissed.” The open letter from Daily Show women took that one head-on. “We’re indispensable,” they wrote. “We generate a significant portion of the show’s creative content and the fact is, it wouldn’t be the show that you love without us.”

Fair, fair, and more than fair — awesome. I had no idea so many women worked at the Daily Show and as a viewer and fan it was sort of incredible to see them all arrayed across that familiar set.

But it’s also incredible because it’s so unusual. Because when we’ve gotten a glimpse of the people behind the scenes in the past, emerging from the shadows to, say, claim their Emmys, that picture looks more like this: 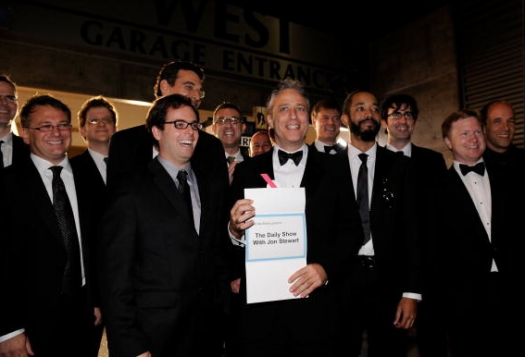 And that’s what the letter did not address.

Where there is a heavily-lopsided ratio, there is a legitimate reason to ask why. That falls squarely on Jezebel’s beat. Even more so since the “women in the late-night comedy club” has gotten so much attention this year, since the Letterman story broke and beyond, covered widely in mainstream as well as rabidly feminist media.

And that’s what made me sad about the Women of the Daily Show open letter: it seemed to freeze out the question entirely, the notion of questioning entirely.

I understand where they are coming from, why they wrote it — and more than that, that they are damned proud of making it to one of the coolest and most competitive jobs in television. And more than that, I also get that they are there because they got themselves there — they actually applied, put themselves in the ring, showed up. As Lizz Winstead and Alison Silverman have pointed out, there are very few female applicants. (Note that that’s the same reason given for the dearth of women getting VC money in the new media/tech startup scene.)

But — there are reasons for why there are so few female applicants. Is it just that women are lazy and/or unqualified (or worse, unfunny?) Come on. It is not new to acknowledge that the pathways to these positions heavily favor men.

Women are funny. Women can be hot and funny. Men can be, too! There’s no reason why they can’t be hilarious together. But still, an overwhelming most of the time, they are not. And that’s why Jezebel did everyone — women, comedy, women in comedy, and even these women in comedy — a favor by raising this issue.