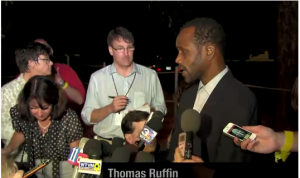 Following the controversial execution of Troy Davis, his lawyers spoke out passionately about what they perceived as a grave injustice and characterized his punishment as a “legalized lynching.”

“I witnessed something that was horrible, a tragedy,” Davis’ lawyer Thomas Ruffin Jr. said. “This night, the state of Georgia legally lynched a brave, a good and indeed, an innocent man,”

“He made clear in very calm and honest way that he didn’t kill officer Mark MacPhail,” Ruffin added. “He addressed the family and made clear that he didn’t have a gun on the night of August 18, 1989. He called upon the MacPhail family, his family and friends and all of those who have want what’s right to prevail and what’s wrong to be crushed.”

Jason Ewart, who also represented Davis during the case added that he hoped his death would not be in vain and that the death penalty would be reformed as a result of his case.

“This case struck a chord in the world, and as a result the legacy of Troy Davis doesn’t die tonight,” Ewart said. “Our sadness, the sadness of his friends and his family, is tempered by the hope that Troy’s death will lead to fundamental legal reforms so we will never again witness, with inevitable regret, the execution of an innocent man as we did here tonight.”

Ruffin noted that there was a vast racial disparity in the state of Georgia where 48.4% of people on death row were black males, despite only making up 15% of the population. “As long as the death penalty is applied in a racially bigoted fashion and a class bigoted fashion, this sort of cheating, this sort of legalized lynching this sort of heartless application of punishment will continue. It has to come to an end.”