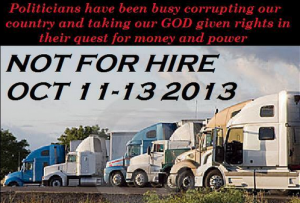 If you’ve ever driven in our nation’s capital, you’ll know that traffic can be a nightmare and navigating all those damn circles is the worst. Well, get ready for a fun surprise, because a group of conservative truckers are organizing a mass on-the-road protest in DC this Friday that involves clogging traffic on the beltway and even arresting members of Congress.

These truckers are planning a little shutdown of their own, pledging not to haul freight this next weekend, and in a document detailing the event and what it’s about, they target “domestic enemies” like President Obama and John McCain and their list of complaints includes high fuel prices, the claim that “we now support al-Qaeda” in Syria, overregulation, and “the criminals who are responsible for stealing trillions from our country.”

Earl Conlon, a Georgia trucker helping organize the event, offered some details about exactly what they’ll be doing.

The truckers circling I-495 will keep the left lane open for emergency vehicles, Conlon said, but “everybody that doesn’t have a supporter sticker on their window, good luck: Nobody in, nobody out.” The trucks will be going the 55 mile-per-hour speed limit.

D.C. commuters who wish to be allowed past the convoy must have “T2SDA” – an acronym for the event’s original name, “Truckers to Shut Down America” – written on their vehicle, he said.

So, in other words, if you don’t have that acronym on your car, YOU SHALL NOT PASS!

And these truckers also want members of Congress arrested for violating their oath of office, saying they will do it themselves if they can’t convince local law enforcement to do it for them.

[photo via Truckers Ride For the Constitution FB page]