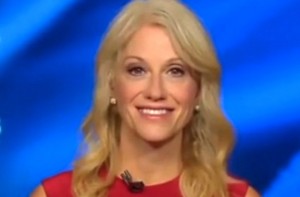 The Donald Trump campaign pulled out all the stops in expressing outrage at Hillary Clinton‘s “basket of deplorables” remark, even falsely asserting that it was directed at all Republican voters, but it turns out that some of those same people actually did denigrate much larger groups of voters than they’re accusing Hillary of.

Donald Trump himself said that fully half of Americans “don’t do anything” and are “carried” by the other half, and in video unearthed by Mother Jones‘ David Corn, Trump campaign manager Kellyanne Conway repeatedly called Americans “pigs” who deserved the consequences of the fiscal crises that befell the country in the waning days of the Bush administration. In an appearance on Fox Business’ Happy Hour in 2008, Conway scolded the host for being “unfair” to Wall Street:

I think that’s unfair because these people bought houses they could not afford. I mean, Julie, if you go out tonight and you spend $10,000 on a credit card and you make $8,000 a year, you could do the math. So people bought houses they couldn’t afford. They know that. This country spends money like a bunch of pigs. They buy things they say that they need…when they actually want them. That’s their business. But they should be in charge of their own economic sovereignty.

A few days later, at a Council on Foreign Relations forum, Conway made the comparison again:

I think that [moderator Joe Klein’s] point about what is the cost of the [Iraq] war and how does that play into the economy vis-à-vis the American’s mind—If [voters] say, “Gee, we’re having a problem in this country economically because of the cost of the war, not because I live like a pig off my credit cards (which most people won’t admit in this country),” then, I think, it’s a whole new problem for some of the candidates, particularly on the Republican side.

Conway’s current candidate is on record having rooted for the housing crisis that Conway referred to in the first clip, but in defense of both, neither of them called a bunch of racists “deplorable.”