Trump Has Mexicans, Carson Has Muslims and Now Fiorina Has Women
VIDEO

Trump Has Mexicans, Carson Has Muslims and Now Fiorina Has Women 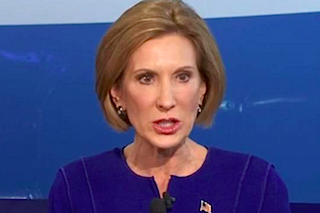 “We ought to recognize that women are not a special interest group. Women are the majority of this nation, we are half the potential of this nation and this nation will be better off when every woman has the opportunity to live the life she chooses.”

That’s what Carly Fiorina said at CNN Republican presidential primary debate earlier this month instead of naming a woman she would place on the $10 bill.

It is statements like those — along with her rapturously-received repudiation of Donald Trump’s comments about her face — that have helped Fiorina rise in the polls over the last two weeks.

In the latest NBC News/WSJ poll out this weekend, she is essentially tied for third place with Marco Rubio (behind Donald Trump and Ben Carson, who are neck-in-neck for the top spot). While Fiorina didn’t even make the cut for Fox News’ first primetime debate, she now sits solidly in the top five according to Real Clear Politics’ average.

But like Trump and Carson, Fiorina has had to alienate a large number of potential general election voters in order to get there. While Trump lost Latinos by calling Mexican immigrants “rapists” and Carson lost Muslim-Americans by saying they are unqualified to be president, Fiorina is in grave danger of losing the one group that can help her the most, the one that just happens to be a “majority of this nation”: women.

At the same debate where she said she wanted every woman to have “the opportunity to live the life she chooses,” Fiorina dared potential 2016 general election rival Hillary Clinton to watch the Planned Parenthood “sting” videos that have been making the rounds online over the past several weeks. “Watch a fully formed fetus on the table, its heart beating, its legs kicking, while someone says, ‘We have to keep it alive to harvest its brain,'” she said. But as Politifact and others determined, the euphemistically-titled Center for Medical Progress that produced the videos inserted that stock footage with no proof that it came from a Planned Parenthood clinic.

But that did not stop the candidate from saying she would be in favor of shutting down the government to prevent federal funding of the organization. “I believe if the president of the United States and Democrats are willing to stand up and defend for what is roughly $500 million to $600 million line item in a budget, if they are willing to stand up and defend this practice and shut down the government over it, then let them explain it to the American people,” she told Todd, attempting to pin the issue on Democrats. “I believe there are a variety of ways to deal with this. But I believe this is something we must stand up and fight for. Because it is about the character of our nation. Taxpayers are funding this activity.”

Actually, they aren’t. As the Washington Post’s Janell Ross reported last month when this issue started to bubble up again, “federal dollars are not used to provide the service at the center of the political debate around Planned Parenthood: abortions. That’s been banned by law in almost all cases since 1976.” On top of that, abortions only account for 3% of the services that Planned Parenthood provides, so private donations can easily fund that portion, which is 100% legal thanks to the Supreme Court.

This all means that if Fiorina and others in the Republican Party succeed in defunding Planned Parenthood, it will have little to no effect on abortion. Instead, it will devastate one of the country’s largest providers of basic women’s health services like STD testing and cancer screenings that actually save lives.

As inelegantly symbolized by the protesters who threw condoms at Fiorina in Iowa over the weekend, Fiorina is already feeling the backlash from progressive women who she very well could have stolen away from Hillary Clinton’s struggling campaign.

Writing for The New York Times on Monday, Amy Chozick, who typically covers the Clinton campaign, spoke to several young women who consider themselves feminists, and were initially intrigued by Fiorina’s candidacy, but were ultimately turned off by her unrelenting anti-abortion views. One by one, they said they admired Fiorina as a candidate, but could not get past what they see as a betrayal of women on the Planned Parenthood issue.

“It’s so weird — she looks like one of us, but she’s not,” novelist Jennifer Weiner told Chozick. “You’re on the bus with her until she starts talking about Planned Parenthood.”

Like Trump’s fear-mongering about immigrants and Carson’s blatant Islamophobia, Fiorina’s attack on Planned Parenthood may be working for her in the short term. But if she were to make it to the general election next year, does she really want to be seen as the candidate who would rather shut down the federal government than help women get the health services they need?

If Fiorina truly believed that “this nation will be better off when every woman has the opportunity to live the life she chooses,” she would leave Planned Parenthood alone.