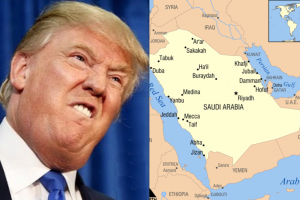 Real estate mogul and Republican frontrunner Donald Trump weighed in on recent Saudi Arabian economic threats in defiant fashion during a radio interview Monday morning with The Joe Piscopo Show on AM 970 THE ANSWER.

This weekend Saudi Arabia threatened to sell off an estimated $750 billion in United States assets if a bipartisan bill passes that would allow 9/11 families to sue the Saudi government. The heat has been turned up in recent weeks over Saudi Arabia’s involvement in the deadly 2001 attacks, and the subject of the mysterious redacted 28 pages of the 9/11 Commission Report has worked it way onto the campaign trail for candidates to weigh in on. “The [Saudi] officials have warned senators of diplomatic and economic fallout from the legislation,” according to a report from The New York Times.

Radio host and comedian Joe Piscopo asked Trump about it directly on Monday morning, saying, “We’re seeing Saudi Arabia threaten us saying they’ll sell off all their US assets if we allow…”

“No big deal. You make a good deal,” continued the author of The Art of the Deal to Piscopo. “Look, we protect Saudi Arabia. We protect them for peanuts. And, you know, if we weren’t protecting them Joe they wouldn’t be there for a week. And we protect them and we protect others.”

“We don’t get reimbursed fair numbers. Are we wonder why we’re $19 trillion in debt. But we’re like the policeman to the world… we don’t get what we should be getting,” Trump continued.