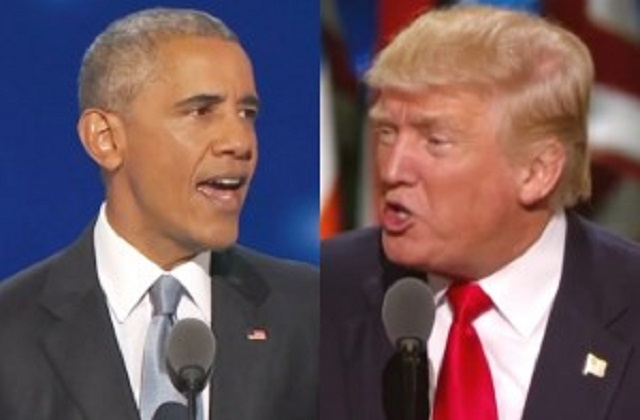 It is no secret that President Donald Trump won the election because of a relatively small amount of votes in three states — Michigan, Wisconsin, and Pennsylvania. Despite losing the national popular vote by roughly three million, Trump was able to narrowly pull out these three states — states that all went to Barack Obama by comfortable margins in 2008 and 2012.

So, obviously, there were a lot of crossover votes this past cycle, with folks who previously voted for Obama casting ballots for Trump. So, considering that the two men are diametrically different, and Trump introduced himself on the national political stage via birtherism, how do some of these voters explain this shift?

Well, the Washington Post’s Aaron Blake dug through transcripts of focus groups conducted in Michigan and Wisconsin and came up with some pretty amazing revelations.

According to one woman in Wisconsin, she voted for Obama because she was hoping it would help ease race relations, all while using some racially offensive language:

“I voted for Obama too, because, I mean, there’s always been a white person, obviously, in office. I mean, he was of African descent, so I voted for him thinking I would change a little bit of the race issues that we had going on and make the colored people feel better, like they have a black person in office.”

So it would appear that for this woman, at least, the race issues haven’t changed all that much. Slate’s Jamelle Bouie had a noticeable reaction to this woman’s answer:

“i thought obama would make the black people shut up, and they didn’t, so #maga“

this is a more common view than people think, and something to remember when someone says that obama voters couldn’t be racist.

Meanwhile, a man from Wisconsin expressed amazement that Trump was the real-life president, despite voting for the man:

“‘I’m still, to this day, amazed he’s our president. I think about it sometimes, and I can’t believe it. Like I’ll see him on TV, and I just can’t believe he’s the president. … I mean, one minute he’s on this thing — you know, ‘You’re fired’ and all that stuff — and the next thing he’s, you know, we’re sending missiles over to Syria. And I just, I’m just, I’m wowed.” (Again, this man and everyone else here voted for Trump.)

As far as Democratic presidential nominee Hillary Clinton, there were some strong opinions given, including from this Michigan man:

“I just, she never like went away and like rebranded herself. She just stayed. She was like a piece of [expletive] that wouldn’t go down the toilet. She just like, she was done being secretary of state. You knew the next step was she was just gearing up to run for presidential, and she never got away. And then there always like with her and her husband, just always some kind of scandal of them d‑‑‑ing people over.”

While there was also the feeling that Clinton was cheating via the use of an earwig:

“Well, on top of that, she had an earwig in, and they were feeding her the answers.” (This was a conspiracy theory pushed by the Drudge Report and others. A woman on the panel seemed to agree, responding: “Right, well, that’s what I’m saying.”)