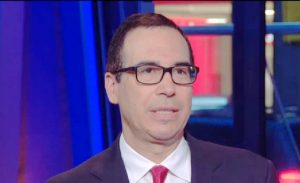 When it was announced that President-elect had decided on former Goldman Sachs banker Steve Mnuchin as his Secretary of Treasury, much of the attention was focused on Mnuchin’s Wall Street ties in contrast with Trump’s promise to “Drain the Swamp.” Especially since Trump denigrated Goldman Sachs specifically on the campaign trail.

However, after some digging into the financier’s business past, it looks like there will be more mud Democrats can sling at him during his confirmation.

According to Politico, OneWest, a bank Mnuchin created in the aftermath of the 2007-08 financial collapse, once foreclosed on an elderly woman over a 27-cent payment error.

Two years ago, OneWest filed foreclosure papers on the Lakeland, Fla., home of Ossie Lofton, who had taken a reverse mortgage, a loan that supplies cash to elderly homeowners and doesn’t require monthly payments.

After confusion over insurance coverage, a OneWest subsidiary sent Lofton a bill for $423.30. She sent a check for $423. The bank sent another bill, for 30 cents. Lofton, 90, sent a check for three cents. In November 2014, the bank foreclosed.

A nonprofit legal service contested the foreclosure on Lofton’s behalf and asked for a jury trial last month.

The company was formed out of the ashes of high-risk mortgage lender IndyMac, which was shut down by the FDIC. Mnuchin and his partners purchased the assets of IndyMac and were able to get the government to cover the cost of the bad loans. They then began foreclosing on the loans, eventually to the tune of 36,000 foreclosures. The FDIC has so far paid OneWest $1.2 billion. And last year, the company was sold to CIT Bank for $3.4 billion, resulting in a $10.9 million payout to Mnuchin.