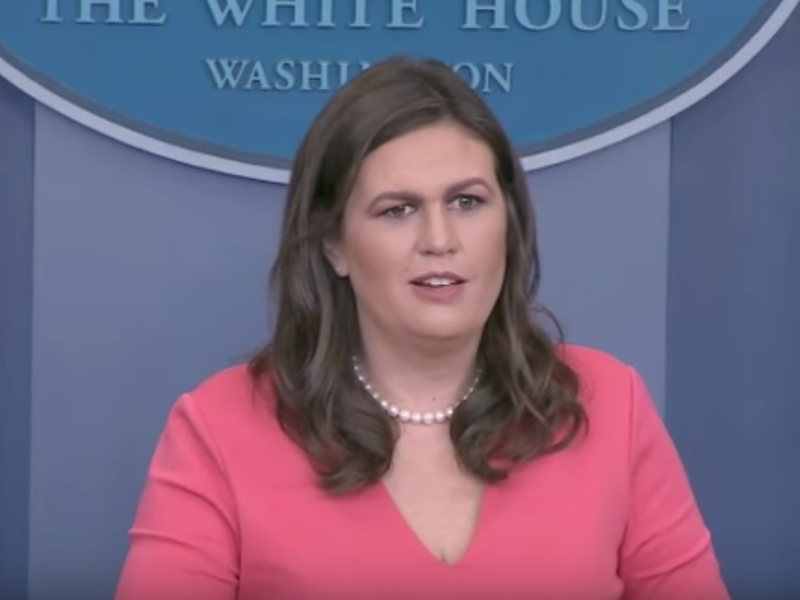 The Los Angeles Times published an editorial denigrating Sarah Huckabee Sanders earlier this week and, though the writer tried to make a point about the press secretary’s unwavering commitment to uttering falsehoods, set off a Twitter firestorm after referring to her as “a slightly chunky soccer mom.”

Here is the full quote, as originally authored by Pulitzer Prize-winning columnist and cartoonist David Horsey, which attempts to draw context by contrasting Sanders with previous right-leaning mouthpieces:

“Much like Roger Ailes when he was stocking the Fox News lineup with blond Barbie dolls in short, tight skirts, the president has generally exhibited a preference for sleek beauties with long legs and stiletto heels to represent his interests and act as his arm candy,” Horsey wrote. “Trump’s daughter Ivanka and wife Melania are the apotheosis of this type. By comparison, Sanders looks more like a slightly chunky soccer mom who organizes snacks for the kids’ games.”

This happens in the first two paragraphs of Horsey’s column, making the next 1,000 words, and whatever cogent points contained therein, absolutely moot. Insults based on physical appearance are pretty much always in poor taste. Calling President Trump’s skin “orange” skirts by, perhaps based solely on the his rumored trips to the tanning salon. Full on body shaming, though? Forget about it.

Twitter was quick to point out how ridiculous Horsey’s poor turn of phrase was, especially coming from a man:

You're not going to make me defend Sarah Huckabee Sanders on this day. Also, calling anyone a "slightly chunky soccer mom" is wrong and dumb

I hate her, and she’s a compulsive liar, but condescending misogynistic cheap shots from a man don’t help.

LA Times’ @davidhorsey mocked SHS’ appearance, saying she resembles a “slightly chunky soccer mom who organizes snacks for the kids’ games” — he said this while wearing THIS backwards toupèe pic.twitter.com/ujqesQGznh

really? with this as the illustration? “slightly chunky soccer mom” seems tame. pic.twitter.com/o7hXpbxgSE

No fan of SHS or the administration but this is wrong. Judge her on her work, not her looks.

Why the hell didn't an editor cut this lede abt Sanders being a "slightly chunky soccer mom"? Mean. Unnecessary. https://t.co/J8Kjax1Nnf

What editor published this shockingly sexist piece from @davidhorsey at the @latimes? pic.twitter.com/91mLOqCe4s

hey @davidhorsey i wrote about how your column about sarah huckabee sanders was, uh, the worst https://t.co/5zQfTsZJDT

Why People Hate The Media, Chapter XVII. You can criticize what a woman says without impugning her looks https://t.co/BT2J7JE2cQ

As of this writing, the Los Angeles Times and David Horsey have yet to respond to the backlash.

UPDATE 4:00 p.m.: The column’s author, David Horsey, has removed the offending segment and offered a full apology to readers and to Sarah Huckabee Sanders.