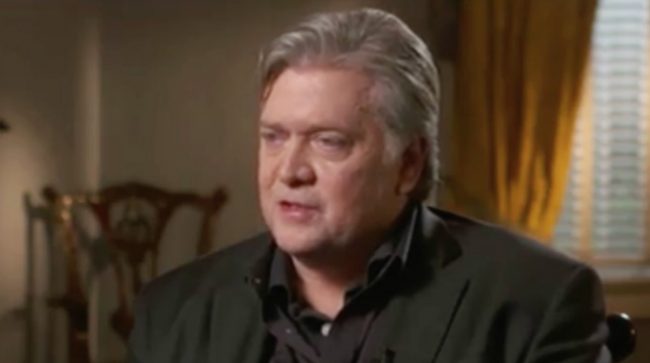 President Trump finally let loose on Steve Bannon in a White House statement today saying he “lost his mind” after he was fired. And Twitter is having a field day.

Donald Trump Jr. is turning on Bannon now too:

Thanks Steve. Keep up the great work. https://t.co/J9O8CUfJAD

Minus the foul language The Mooch pretty much nailed it. https://t.co/lVLP3p4XPT

does this look like a man who has lost his mind, I ask you pic.twitter.com/f8BOg1i2Y2

After this blow-up, I think it could be as long as a week before President Trump is back on the phone with Steve Bannon.

Isn’t that just THE cutest.. !! Our pres said it’s Steven who lost his mind https://t.co/le1ypH99uQ

This popcorn is salty but it’s good popcorn https://t.co/Uwrzum1I6X

This Trump vs Bannon feud is a shallow attempt by the writers to get us invested in the new season, and sloppily written at that.

The big loser in the latest Trump-Bannon crisis is the dignity of the US. The big winner is Michael Wolff and his book sales. Next time I have a book coming out, I invite President Trump to rage against it.

This whole Trump/Bannon thing would make such a great NYT Modern Love essay.

In the Trump-Bannon divorce, who gets custody of Gorka?

Bannon vs Trump. Whoever wins, we lose.

It turns out Trump does have a nuke button on his desk – he just used it against Steve Bannon.

Trump v Bannon is on! But who to root for in Madman v Madman?

Steve Bannon tried to do to the Trump presidency what he did to Breitbart News. Trump’s nuclear button was bigger.

Trump disavowing and trashing Bannon is interesting not just as reality TV drama — his initial response is not to dispute Wolff’s reporting or the substance of Bannon’s “treason” claim.

In light of Trump’s attack on Bannon, today’s litness forecast has been revised pic.twitter.com/7uIncCMZQK

Now we have to see how the @realDonaldTrump base feels about the President going after Steve Bannon!

Thank you 2018 for this Trump-Bannon fight you’re starting out great!

Bannon knows how vulnerable Trump is and he sees the writing on the wall that this presidency is in serious jeopardy. He won’t be the last Trump Team defection.