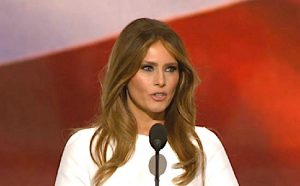 As Twitter users continue to voice their thoughts about Donald Trump winning the 2016 election, there have been quite a few shots taken at his wife Melania. Interestingly, it would seem that there’s been a recent uptick in people who have bashed the mogul’s wife by invoking the photos she took in her modeling days.

In the last few days, several Twitter users have shared Mrs. Trump’s nudes and risqué photographs, while saying that they prove she is unbefitting of the title of First Lady. It is unclear when this trend began, though GQ and The Sun recently promoted their articles pertaining to Melania Trump’s pictures:

We won’t post the soon-to-be-First Lady’s naked pictures here, but here are a few tweets to give you an idea of what’s been shared:

Melania Trump was a stripper&her nudes was leaked ,but she da 1st lady. STRIPPERS THE SKY IS THE LIMIT NOW ♥️

You can google Melania Trump's nudes. The next first lady.

Melania Trump is about to be the 1st First Lady with nudes on the Internet. All opinions aside….Titties

Of course, the trend has been getting a lot of blowback as well. People have argued that beyond the fact that Mrs. Trump was a model a lot longer than a political figure, there are much better ways to criticize her:

There are literally thousands of reasons why Trump shouldn't be president, but "Melania posed nude once" is absolutely not one of them

can ppl stop dragging Melania Trump for her nudes its so misogynistic, start dragging her for serious shit that makes her a terrible person

Bruh why is everyone bashing Melania trump for nudes,not like the girl knew she was gonna be the First Lady or anything smh.

The irony is unmistakable.

Talk shit about Melania being an enabler to an abusive piece of shit. Not because she modeled naked

People slut shaming Melania Trump for her past tasteful nudes! just stop! just because you don't like Trump, doesn't make it OK!

I'm not interested in demeaning Melania Trump for her nudes. Drag her enabling DT, for xenophobia, for victim blaming. Not nudes.