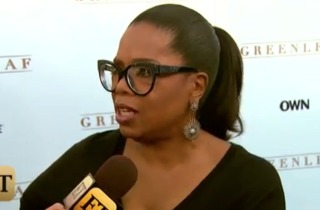 Oprah Winfrey doesn’t usually lose support among her fans, though it would seem that they are not pleased with her for holding out hope that Donald Trump‘s presidency might not be so bad.

The media mogul supported Hillary Clinton throughout the election, and she felt the shock that many felt when the former secretary of state was surprisingly defeated by the mogul this week. Nonetheless, Winfrey took notice of Trump’s meeting with President Obama this week, and she said that it “gave [her] hope” to see the two of them play nice with each other.

Unfortunately, Winfrey faced immediate backlash from Trump’s most ardent critics, who argue that there is no reason to be hopeful about the situation:

Oprah is wrong. A photo op is not reality. https://t.co/QBSFP90TJE

My first time seeing this.

I'm stumped honestly. Want to assume she means something deep that doesn't come through well on Twitter. https://t.co/eNUM2MxCcz

It sure is a mystery why Oprah is forgiving our income-ing President.

I don't need @Oprah telling me I can take a deep breath when this new administration supports cutting my job and firing me for who I date.

No @Oprah we're not going to take a deep breath, love you but with all due respect, the hatred that man has released won't touch your life. https://t.co/CNjOnCSuoW

What's really sick right now is how "Live Your Best Life" types like @marwilliamson and @oprah are bowing down to a racist, sexist madman.

Oprah what the fuck? This is not one of my favorite things. https://t.co/yfGmR2NFLf