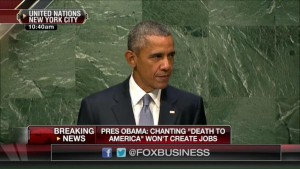 During his Monday morning speech before the United Nations General Assembly, President Obama uttered quite the interesting aside about a particular anti-American chant.

The president spent a portion of his address condemning the actions of Assad and ISIS, calling them an “assault on humanity.” Yet it was when the specific topic of the Iran Deal came up that Obama made a rather weird turn of phrase.

Following his comment that the deal provided Iran with a great opportunity for development, Obama quipped: “Chanting ‘Death to America!’ does not create jobs or make Iran more secure.”

Needless to say, the combination of Obama’s name and the phrase “Death to America!” ignited the louder nether regions of Twitter.

Some resorted to attempts at humor:

Not sure what Obama means by “Chanting Death to America does not create jobs” It created 4 successful airline pilots.

Most were just reactionary:

Watching Obama addressing the UN is just sickening! Obama SMIRKS an says “Chanting Death to America, does not create Jobs in Iran” disgrace!

You don’t work with anyone Obama you freaking liar. Except countries that chant death to America.My God how freaking naïve are you!

“chanting death to america does not create jobs” – Obama, forgetting that the guy who makes US flags to burn is a job creator

Shorter Obama at UN speech: “You jive turkeys over in Iran are making me look bad, chanting Death to America”. #tcot

Not to mention the occasional outright lie:

UPDATE–5:09 p.m. ET: Not everyone in the above selection identifies as a “conservative.” The “reactionary” label, however, remains.