Cable News Taunting Good For Ego, Not Good For Business 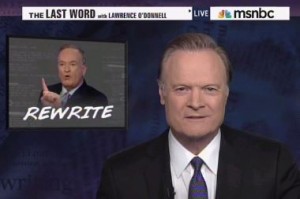 You know what you’ll never find at McDonalds?

How about what you won’t see in a Red Sox shop outside of Fenway Park?

There are no Pepsi machines at Coke factories.

No Fords in the parking lot at Chevy headquarters (Of course, I’m in Jersey and can’t confirm this. Can someone reading this in Michigan check?)

So given those very basic rules between rivals, why haven’t cable news producers received the memo?

Why, after the now-infamous Bill O’Reilly–Alan Colmes battle on Tuesday night, can’t decision-makers at (particularly) CNN and MSNBC concentrate on making their own network talent and content better and more compelling instead of showcasing talent and content from… a rival network?

On CNN alone, the O’Reilly-Colmes family feud was featured in at least five segments.

If I’m a loyal CNN or MSNBC viewer and I watch these kinds of segments that focus on Fox News, do you know what I might do the following night?

I’d switch to Fox to see what all the buzz was about. And who knows? Maybe I’d never go back if I liked what I saw.

Dog-eats-dog journalism used to be taboo. Before cable news, we didn’t see Peter Jennings doing segments about a gaffe Tom Brokaw made, or Dan Rather slamming Jennings. And even when the current cable news war came to fruition when Fox took over the top spot 12 years ago, there still wasn’t much of any attack journalism to be found.

And then along came Keith Olbermann.

Upon returning to MSNBC in 2003, Olbermann quickly realized that providing an audience five hours of compelling programming per week was a difficult task. Most guests are fairly predictable and dry, most political topics outside of catfights between Republicans and Democrats, tedious. So he created a foil, a nemesis, in the form of his decidedly-more popular (in terms of ratings) 8:00 p.m. competitor, Bill O’Reilly. The formula (as pointed out in this space before), was simple:

Olbermann would attack O’Reilly, invariably in his “Worst Persons” segment.

O’Reilly would refuse to respond to Olbermann by name. Even his guests and contributors were instructed not to evoke Keith in any manner. Instead, “NBC News” and “General Electric” (NBC’s parent company at the time) were basically code for “Olbermann” when firing back.

O’Reilly knew responding to an anchor with half his audience would only serve to grow that audience, fan the flames and hurt his image of superiority (again, from a ratings perspective) by punching down. In the end, Olbermann never seriously challenged O’Reilly, and the latter only expanded his influence throughout all levels (television, print radio, etc.) of media.

So does CNN or MSNBC benefit by attacking Fox?

Sure, it may provide their more myopic audience members some red meat (“Look! O’Reilly is yelling at someone! Fox is stupid!”), all while replacing some-otherwise-boring or repetitive segment in the process (“COMING UP: Who’s to blame for the sequester? Republican strategist (insert name) and Democratic strategist (insert name) will predictably provide their talking points like two C-3POs to help you get a good night’s sleep…THAT’S NEXT!”). Ugh.

Of course, Fox will return the favor in this regard as well, but not remotely as often due to the punching down theory outlined above. For them, it’s more to push a narrative it particularly excels at: Media bias and the guilty parties behind it. Pointing out an on-air brawl between a right-leaning O’Reilly and a liberal Colmes doesn’t prove any point around bias (two sides being presented). Instead, the footage is provided simply for supposed shock value of seeing a prominent host berate one of his co-workers by calling him a liar on national TV, all while (allegedly) to prop up the network (CNN, MSNBC) as superior to such behavior (which, if this clip and this clip are any indication, are not).

The final challenge around such segments is execution. O’Donnell and Schultz did a fair job mocking O’Reilly, but there are two bigger issue that always seem to be ignored:

1) Try as they might, news anchors and hosts aren’t comedians (where delivery is everything).

2) Jon Stewart sets the bar too high in ridiculing the media (and especially Fox) every night. Anything else presented pales in comparison.

Samsung Galaxys are tough to find on Apple’s campus.

Jennifer Aniston doesn’t have a poster of Angelina Jolie on her wall.

Memo to the cable networks: It may feel good at the time, it may feel like sweet revenge and it may eliminate seven minutes in a show rundown.

But by taunting your rivals time and time again, be aware you’re only doing one thing: