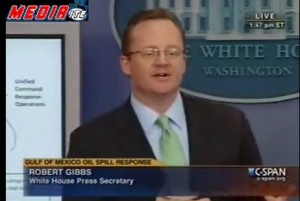 At today’s briefing, aside from dropping the pop-culture reference of the moment, Press secretary Robert Gibbs adeptly fielded questions about his “professional left” remarks yesterday. He essentially stood by his remarks, and rattled off a list of accomplishments, and some in the pipeline, that the Pro/Am Left should be pleased with.

As Gibbs echoed my sentiment about liberals turning out in November, I realized that Gibbs had done something rare, indeed: He had seized control of the news cycle for the left. Now that he has their attention, will it pay off?

Here are several of Gibbs’ answers to reporters today:

Whether intentional or not, Gibbs seems to have hit on the solution to the biggest problem facing Democrats in November: a sleepy, discontented base. I don’t think I’ve ever seen liberals as energized as they were yesterday. Hopefully, they were listening today. For the Democrats, framing this midterm election as a choice, not a referendum, is crucial.

While it’s doubtful Gibbs saw this reaction coming, I’m sure he meant to reach another audience. Is it an accident that he made these remarks to The Hill, and not one of his more regular sounding boards, like Politico? I think not, especially when you think back to the last time Gibbs supposedly put his foot in his mouth. That would be when he told Meet the Press that there were enough seats in play for the Republicans to take back the House.

This seems to be a pretty clear strategy to wake Democrats up from their “how many seats are we gonna lose?” doldrums, and remind people that, while not everything they want is getting done now, a GOP-led House promises a full stop, or a slide back.