Was This Anti-Rubio Site Set Up by the Trump Camp?

A new anti-Marco Rubio website first noticed today is raising some eyebrows online because of a possible connection to Donald Trump‘s campaign.

Why? Well, first, it’s been reported that Trump advisor Dan Scavino was the first to tweet about it:

And if the phrase “Marco ‘Amnesty’ Rubio” sounds familiar to you, it’s probably because Trump himself has used it:

The site––which rips Rubio’s immigration record and calls him “Jeb Bush without the honesty”––was first reported today by Breitbart in a rather glowing piece, and Trump himself tweeted it out afterwards:

Breitbart talked about it as a “mysterious” new site, and they say “At this time, it’s unclear who made the website.”

BuzzFeed picked up on the site and 1) noticed that it was only created this week, and 2) confirmed that Scavino was the first to tweet about it: 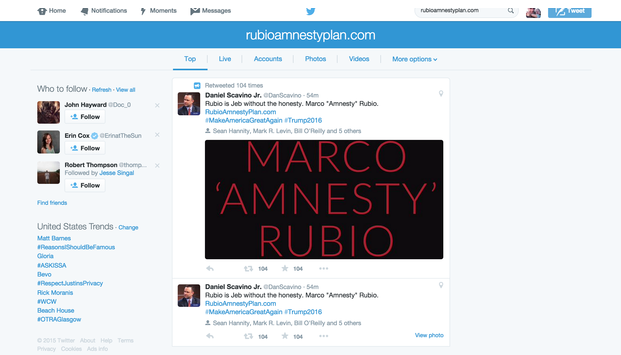 And as both BuzzFeed and the Washington Free Beacon have pointed out, if the site is connected to the Trump campaign, it could be a violation of FEC rules for not disclosing that fact:

Is a disclaimer required on e-mail or our web site?