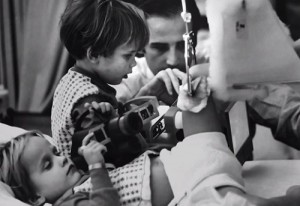 Vice President Joe Biden reportedly does not want the Draft Joe Biden Super PAC ad that premiered on Wednesday to air during the upcoming CNN debate.

The political ad, titled “My Redemption,” features the vice president’s remarks from his Yale University Class Day speech this past May, which he gave weeks before the death of his son, Beau Biden. At the time he told Yale’s graduating class about the tragic deaths of his first wife Neili, and his one-year-old daughter Naomi, affected his early political career.

According to the Los Angeles Times, sources close to the possible 2016 presidential contender revealed that Biden has seen the ad, which hasn’t run on television yet. It currently exists on YouTube, where it has amassed over 90,000 views in just over 24 hours, and during some cable news shows that discussed it with Draft Joe Biden. Yet the Super PAC’s original intention was to run the ad ahead of and during the upcoming Democratic debate.

“The vice president appreciates that they are trying to help,” said an unnamed source, “but he has seen the ad and thinks the ad treads on sacred ground and hopes they don’t run it.”

Neither Biden’s office nor Draft Joe Biden initially responded to Los Angeles Times writer Mike Memoli for comment. However, less than an hour after the story ran, the Super PAC announced that it was going to pull the ad:

Update: @draftbiden to honor @VP's wishes, pull ad. "Nobody has more respect for the [VP] and his family than we do" http://t.co/daGzHbMryN