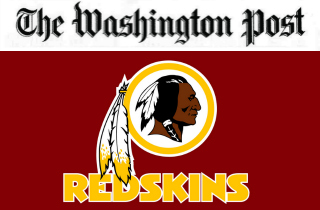 “This page has for many years urged the local football team to change its name,” the editorial board wrote Friday, pointing to a 1992 piece that said the term “Redskins” is “really pretty offensive.” While the team’s owners over the last two decades have disagreed, the board wrote that “the matter seems clearer to us now than ever, and while we wait for the National Football League to catch up with thoughtful opinion and common decency, we have decided that, except when it is essential for clarity or effect, we will no longer use the slur ourselves.”

The editorial board clarified that the change will only effect editorials, not news or sports coverage. “Unlike our colleagues who cover sports and other news, we on the editorial board have the luxury of writing about the world as we would like it to be,” they wrote. “Nor do we intend to impose our policy on our readers. If you write a letter about football and want to use the team name, we aren’t going to stop you.”

Read the full piece at washingtonpost.com.