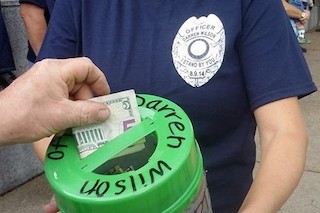 A campaign that emerged this week on GoFundMe.com set a goal of raising $250,000 for Officer Darren Wilson, the Ferguson police officer who shot and killed unarmed black teenager Michael Brown. After just four days, the campaign has garnered nearly 6,000 individual donations totaling more than $234,000.

While most donations have been relatively small, several have topped $500 or $1,000, with one person donating $5,000 under the name Michael Gardner. People can post comments on the site with their donations, many of which have been flagged as being racist and offensive.

Comedian Jon Hendren, who tweets under the name @fart, compiled some of the most appalling comments into one large image below:

did you see the @gofundme where awful people are literally rewarding darren wilson with cash for killing a black guy pic.twitter.com/KLGvLPRaxZ

On Thursday, GoFundMe acknowledged the comments and said it was removing those that are in violation of its terms:

In regard to the 'Officer Darren Wilson' campaign, donors' comments posted in violation of GoFundMe's terms have been removed.

Wilson has been on paid administrative leave for nearly two weeks since the shooting occurred. According to the Washington Post, St. Louis County prosecutors still have not spoken to the officer directly about the circumstances of the shooting.