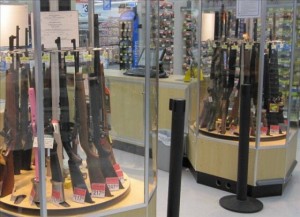 Come July 23, Washington will become the first state that requires survivors of domestic violence, sexual assault, and stalking to receive notification if their abusers attempt to purchase firearms.

It’s no secret that gun violence disproportionately harms women, and lax gun control policies can spell fatal disasters for domestic violence victims. More than 50 percent of mass shootings are related to domestic violence. Specifically, in cases of domestic violence, if the abuser has access to a gun, the chance that a woman will be fatally shot increases by around five times.

This new law is part of a larger bill requiring gun dealers to alert the Washington Association of Sheriffs and Police Chiefs when someone fails a background check. Under federal law, anyone convicted of a felony or misdemeanor crime of domestic violence, and anyone under a domestic violence protective order, is prohibited from purchasing a firearm, but loopholes to this law exist in states across the country. One example of this: Abusers who were in non-legally recognized relationships with their victims as boyfriends or former partners can purchase guns from unlicensed or private sellers.

States with universal background checks on all handgun sales have some 47 percent fewer domestic violence-related gun violence incidents. While the second amendment guarantees the right to gun ownership, it never states that this right can’t be regulated for the purpose of protecting other individuals’ rights to physical safety and self-expression.

In response to the simple fact that weak gun control laws have yielded thousands of domestic violence fatalities, the National Rifle Association pushes the narrative that female domestic violence victims would be safer if they just purchased guns. It’s all part of the classic — and classically disproven — “good guy with a gun” theory by the pro-gun faction.

The simple truth is that more guns tend to equate to more injuries and deaths, no matter who owns the guns, and pressuring domestic abuse victims will likely put them in more danger, rather than the opposite. It’s to be seen how much, if at all, this new law in Washington will help keep domestic abuse survivors, but at the very least, by acknowledging the uniquely relationship between domestic abusers and gun ownership, it marks a powerful step in the right direction.