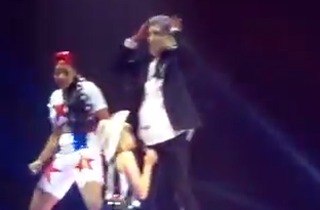 Are you ready to see Miley Cyrus’s sunny, vaguely-patriotic anthem destroyed by an off-target stab at newsy political commentary? No? Then go put your head in this assortment of IKEA buckets and stop reading, because in the below video, shot at the Vancouver stop of Cyrus’s Bangerz tour, the singer trots out a bizarre series of Americana imagery during her song “Party in the USA.” The highlight: A kneeling Cyrus singing “THE BUTTERFLIES FLY AWAAAAY” into the crotch of a man wearing a Bill Clinton mask.

Bill Clinton’s Affair With That Woman seems to be undergoing a cultural renewal as of late, what with Sen. Rand Paul (R-KY) suggesting that pro-women Democrats should distance themselves from supporting a potential Hillary campaign because of Bill’s actions.

And how does Cyrus — a self-styled feminist who was about six when the scandal broke in 1998 — feel about Rand’s anti-feminist stance? Does this action somehow comment on the double standards that concern-trolling conservatives place on Hillary? We’re not sure, because upon seeing this, we put our heads in IKEA buckets, too.

Oddly, Cyrus pretending to perform oral sex on Bill Clinton isn’t the most awkward part of the performance (“Cyrus Pretends to Do The Sex In Public” may be one of the most overdone news topics in recent history). Here are a few things from this video that may be more unpleasant:

Watch below, if you must: