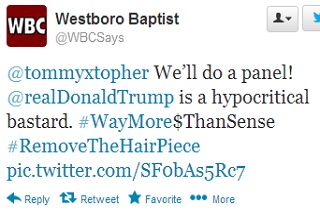 In an appearance on Sunday’s This Week with George Stephanopoulos, once (and future?) GOP presidential frontrunner Donald Trump predictably regurgitated his trademark brand of toxic Birther racism, not only questioning President Obama’s citizenship, but also springing a Birther bear trap on interviewer Jonathan Karl. In response to a tweet expressing displeasure at This Week‘s booking, the universally-hated Westboro Baptist Church blasted Trump as a “hypocritical bastard,” and volunteered its own services as Sunday morning shitshow.

Donald Trump has always been a curiously shameless figure, but his emergence as a presidential frontrunner in 2012, on the strength of relentless appeals to racist Birthers, eclipsed any entertainment value he might once have provided. Undaunted by his humiliation at the President’s hands, Trump has continued to insist that Obama’s citizenship is still in doubt, and it seems the media never gets tired of listening to him.

On Sunday, he re-launched the attack, and perhaps illustrated why respectable news outlets might want to put the Trump crack pipe down when he seized on interviewer Jon Karl’s obviously tongue-in-cheek statement that he was “pretty convinced” the President is a legitimate US citizen.

“Pretty!” a triumphant Trump declared, above Karl’s protestations. “Ah! Pretty! Pretty! No! No! You said, pretty!”

He threw Karl’s reference back at him several more times in the interview, obviously rattlig Karl enough that he didn’t ask Trump how his team of investigators in Hawaii is working out.

It’s a free country, and Donald Trump is certainly free to make a fool of himself, but news organizations have no duty to make themselves fools right alongside him. After I saw the Trump post on Mediaite, I tweeted that sentiment, in somewhat colorful terms:

What a joke that This Week had on Donald Trump. Why not a panel with Westboro Baptist? “Does God hate fags; some say yes.”

My point, of course, is that even in trying to challenge Trump’s idiocy, media outlets confer legitimacy upon it, and even risk becoming accomplices to it. In response, though, the ever-sharp Westboro Baptist Church tweeted:

They accompanied the tweet with this picture, one of their trademark tri-colored signs which read “God Hates Adultery.”

For the uninitiated, Westboro Baptist Church is the tiny sect that has made a name for itself by holding “God Hates Fags” protests at, among other events, the funerals of slain U.S. servicemen, earning them near-universal contempt. While he was already close, Trump’s latest antics may have placed him in Westboro Baptist’s company as the loons that everyone can agree on. Now that the GOP is trying to slow the rate at which it alienates minorities, and fielding a candidate with his own Trump-suspected pedigree, conservatives are even less likely than liberals to have Trump all over the TV.

Television news outlets should be asking themselves if they want to buy the Trump ticket this time, either. As Trump’s This Week appearance demonstrates, it’s hard to put Trump on your show without getting some of it on you.