‘What a Train Wreck’: Twitter Skewers Trump Spokeswoman Over Interview on ‘Mexican’ Judge 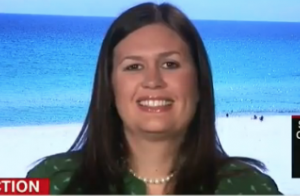 If Twitter activity is an indication of the public mood, it seems that a lot of online news viewers aren’t showing any mercy for Donald Trump‘s surrogates as they tie themselves in knots to defend him.

Sarah Huckabee Sanders appeared on CNN’s New Day this morning, and she was questioned by Brooke Baldwin over Trump’s persistence on attacking Judge Gonzalo Curiel for his Mexican ancestry. Baldwin wondered if it was about time the mogul apologized to the judge overseeing the lawsuit against Trump University. Sanders, however,  seemed to spin away from the topic instead promising Trump will win the presidency.

Baldwin also asked Sanders to respond to those saying that Trump’s comments are harming the GOP’s standing among Hispanics and Latinos. Sanders insisted that they would eventually get on board with Trump over his economic and national security stances, and she proceeded to defend Trump over several of his policy flip-flops.

Unfortunately for Sanders, a great deal of people seem unimpressed that Trump’s spokespeople are continually resorting to deflections and rehashes of old excuses. Senior press representative Healy Baumgardner has been taken to task on this point for the last several days, and today, it seems that its Sanders’ turn:

Sarah Huckabee Sanders doesn’t have an ounce of integrity in her entire body. Disgraceful. #NewDay

Spin doctor for Trump Sarah Huckabee Sanders..great dodger of the questions on his criticism on Judge Curiel…

@sarahhuckabeesanders Shame on you, Sarah, for turning your back on your faith, your conscience, and your moral high ground.

@BrookeBCNN was excruciating watching Sarah Huckabee Sanders trying to defend Trump in her interview this morning.

@NewDay Sarah Huckabee Sanders should truly be ashamed. What an absolute joke.

Shame on her. #shame

Who in the hell is Sarah Huckabee Sanders ? another in the list of babbling lying parrots of the Drumpf cavalcade of propaganda spouters

Sarah Huckabee Sanders – the name for real? Is Bernie aware of his name used in vain?

I’m trying to slog through this @cnn interview with Sarah Huckabee…what a train wreck.