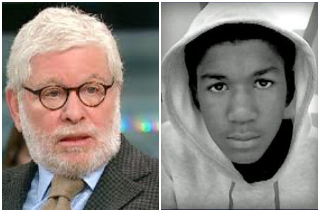 Richard Cohen decided to push the big “national conversation about race” boulder down the mountain Tuesday morning, intoning in the Washington Post that “the least we can do is talk honestly about the problem” of racial profiling.

Okee-doke, let’s give it a go: “There’s no doubt in my mind that Zimmerman profiled Martin and, braced by a gun, set off in quest of heroism,” Cohen wrote. “The result was a quintessentially American tragedy—the death of a young man understandably suspected because he was black and tragically dead for the same reason.”

Understandably! According to Cohen, it’s black men’s fault for making us profile them because they’re just too damn scary:

I don’t like what George Zimmerman did, and I hate that Trayvon Martin is dead. But I also can understand why Zimmerman was suspicious and why he thought Martin was wearing a uniform we all recognize.

[…] Where is the politician who will own up to the painful complexity of the problem and acknowledge the widespread fear of crime committed by young black males? This does not mean that raw racism has disappeared, and some judgments are not the product of invidious stereotyping. It does mean, though, that the public knows young black males commit a disproportionate amount of crime. In New York City, blacks make up a quarter of the population, yet they represent 78 percent of all shooting suspects — almost all of them young men. We know them from the nightly news.

Those statistics represent the justification for New York City’s controversial stop-and-frisk program, which amounts to racial profiling writ large. After all, if young black males are your shooters, then it ought to be young black males whom the police stop and frisk. Still, common sense and common decency, not to mention the law, insist on other variables such as suspicious behavior. Even still, race is a factor, without a doubt. It would be senseless for the police to be stopping Danish tourists in Times Square just to make the statistics look good.

Crime statistics have long been the rational blind for racial profiling, layering the consolation of numbers over base circular reasoning: if more African American males are stopped, more will be arrested, and the crime statistics will show a disproportionate number of crimes committed by black men. One need look no further than the recent study showing that despite an even usage of marijuana among blacks and white, African Americans were 370% more likely to be arrested for possession. According to Cohen’s logic, blacks deserved to be stopped more often than whites for possession because the inequitable statistics demand it.

More to the point, Zimmerman’s shooting of Trayvon Martin destroys the very categorical certainty that supposedly underlies racial profiling as a rational response to crime. George Zimmerman unquestionably profiled Trayvon Martin, yet, you’ll recall, he was not initially arrested for the shooting. The inequities, both numerical and moral, overflow this case: not only did Zimmerman profile Martin by categorizing him as a criminal—the very action Cohen wants us to enshrine into police procedure—but Zimmerman himself was the shooter in this case, yet was not arrested (or convicted) and thus not catalogued in the great determining algorythm that Cohen uses to compress crime into skin color. Zimmerman was not only free to profile Trayvon Martin due to statistics, but he had the added luxury of firing a gun without the siren of statistics chasing him down; he got to shoot somebody with the impunity of not resembling our conception of a shooter.

The result: Trayvon Martin, the black man Cohen says we should be profiling, is dead, yet somehow still getting impugned in the pages of the Washington Post for being a dangerous black man, while the guy who killed somebody with a gun walks free. This, according to Cohen, is a rational response to crime: profiling a black man both before and after he’s shot.

Read the full article HERE, if you have to.