When ‘Journalism’ Becomes The New Weapon Of Mass Destruction 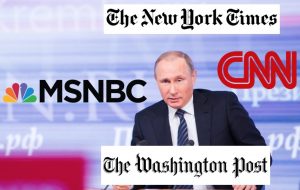 In 2004, during my freshman year in college, I remember turning on the presidential debate between President George W. Bush and Senator John Kerry.

At the time, I was a novice, just dipping my toe into the political water for the first time. Within Bush’s first two answers, I was forever progressive.

Immediately, I studied up on the failures of intelligence—and journalism—that led us into the Iraq War; the taking anonymous intelligence officials word hook, line, and sinker; the dereliction of broadcast and print outlets to prominently feature anti-war critics; the seize and destroy mission to label anyone who doubted the intelligence or mission as “anti-American”; and the total vacancy of investigation into whether Bush and Halliburton Inc.––excuse me––Dick Cheney, had any semblance of an exit strategy.

13 years later, it took one week for the the New York Times, the Washington Post, CNN, and MSNBC to pick up where they left off, this time about Russia.

“There’s a perception that you’re letting President Putin get away with interfering in the U.S. election, and that a response that nobody knows about or a look-back review just don’t cut it,” Josh Lederman of the Associated Press began his question to President Obama at his final press conference.

“Are you prepared to call out President Putin by name for ordering this hacking, and do you agree with what Hillary Clinton now says, which is that the hacking was actually partially responsible for her loss?”

What a real journalist would have asked the President would go like this:

“President Obama, the main reports and evidence cited to cast Russia as the party who hacked political organizations and individuals in the leadup to the election are anonymous CIA and FBI officials. Can you share with us what the smoking gun evidence is that proves the Russian government was behind the hack so the American public has more to go on than unnamed officials who haven’t provided hard evidence?”

This isn’t a revolutionary question. This isn’t even that smart of a question. No, this is the basic bottom of the basement journalistic device that so-called journalists donning fancy suits and fake voices are supposed to ask.

Like… maybe… umm… can you… provide proof that a major nuclear power with an authoritarian leader pulled the strings of a complex, multi-device hack in order to spring a reality TV star into the White House?

But that’s the problem: “journalists” no longer require proof for claims that may lead to war (or anything really). Nope, they are human Pez dispensers for the powerful. If the CIA, FBI, or “high level” officials say so, it’s a mad dash to “break” the story.

Or, as George Tenet put it, “slam dunk.”

Is it possible Russian hackers with ties to the government hacked into the DNC and Clinton campaign? Sure. It’s also possible stoners working at Best Buy did.

(Side note: much love to all stoners at Best Buy).

The 24/7-Russia-hyperventilation-without-providing-real-evidence has overtaken print, digital, broadcast, and cable news, with none of these bastions of the Beltway taking a breath to demand what seasoned, real journalists like The Intercept’s Jeremy Scahill asked: for President Obama to declassify the so-called evidence of Putin’s-reign-of-cyber-terror-against-the-corporate-Democratic-plutocracy (in fairness to Scahill, that was my creative license; he just plainly said Obama Must Declassify Evidence Of Russian Hacking).

So, at about this time of the piece, the trolls are readying their “you’re a Kremlin agent Jordan!” comments. This is the warped reversal of journalism we find ourselves at the close of 2016.

Journalists who demand evidence are naive, or Russian agents. Those who don’t just pass off what sources from the highest levers of power—demanding anonymity—tell us as gospel are enemy number one.

Those who have the audacity to point out what the real hacks permeating America are: corporate-backed Democrats who hack the brains of working people to con them into thinking they are actually representing their interests—are attacked by the cocktail-crowd-political-media-industrial complex.

And make no mistake: these Democrats––you know, the brainiacs who told us to avoid the polls showing Bernie Sanders kicking Trump’s ass head-to-head in favor of the most unpopular Democratic candidate in history––are the main ones on TV and in print, huffing and puffing about big, bad Russia.

Maybe, just maybe, they don’t want to open themselves to a discussion on whether they need to stop having fundraisers with Wall Street bankers and oil executives. Maybe, just maybe, they want to distract their currently-in-despair-Hillary-loving-base with a bullseye that will explain away an epically embarrassing defeat?

Ironically, this political cowardice and corruption may prove to be connected with truth. It may be ultimately proven down the road that Russia, and Putin, hacked the Democrats.

But, even if this takes place, it doesn’t change a fact way more scary.

“Journalists” taking the government line without even blinking haven’t learned a damn thing since their failure to ask the vital questions surrounding Iraq.

As a result, they’re the de facto new weapon of mass destruction.