Where GOP Can Disorient Democrats in 2014 by Agreeing with Them 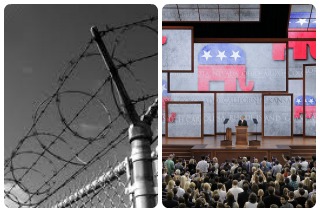 “The majority is at risk,” a “well-connected” Republican operative on the Hill told Washington Examiner columnist Byron York. The columnist spoke with a variety of GOP strategists who fret that the House majority may be endangered – as it was in 2006 and 1998 – if the Republican Party’s national campaign strategy in the coming midterms consists primarily, or even exclusively, of attacking Democrats and President Barack Obama.

York’s sources advocate for the GOP to adopt a platform of reforms – any platform. Privately, many in the GOP will concede that Democrats’ attack on Congressional Republicans as obstructionist and myopically focused on undoing “Obamacare,” in spite of the law’s unpopularity, is effective. But there is one area of policy in which Republicans are leading the way on reform. It is an area which unites factions of the GOP presently engaged in a bitter battle for control of the party’s direction. It is an area in which Democrats tacitly agree with Republicans, though the constraints of governing from the White House have forced many of the party’s establishment voices to abandon calls for reform. Addressing drug enforcement policy, reforming mandatory minimum sentencing, and changing how Americans approach drug addiction and penalties could catch Democrats on unsure footing ahead of 2014.

On Monday, Attorney General Eric Holder announced that the U.S. Department of Justice will no longer pursue mandatory minimum sentences for non-violent drug offenders. He observed, remorsefully, that the nation is “coldly efficient in jailing criminals” – an odd lament, considering this is the AG’s job description. One would hope that dispassionate efficiency in prosecuting criminals is how an attorney general approaches optimal law enforcement policy. Holder made this statement because it was his opinion that mandatory minimum sentencing has a racial component – that young, black men are more likely to be prosecuted and excessively punished for drug offenses.

Permit this author some cynicism; the Justice Department under Holder since the 2012 election has been excessively political. In the wake of the Supreme Court’s decision to strike down portions of the Voting Rights Act, the DOJ announced that it would continue to aggressively pursue violations of that act in a variety of high-profile, campaign-like settings. The DOJ would be remiss if it did not prosecute such violations, but creating a national campaign based around outrage at the Court and those states pursuing voter identification laws is not law enforcement, it’s politics.

Indeed, the DOJ has been actively fomenting racial frustrations. Holder’s objection to the “Stand Your Ground” laws which he said resulted in the jury’s verdict in the trail of George Zimmerman for the murder of Trayvon Martin fits a similar pattern. A New York City justice’s ruling against the NYPD’s “Stop-and-Frisk” policy will follow a similar trajectory when the DOJ and the Obama administration gets around to weighing in on the case, now headed for an appeals court.

Part of the DOJ’s campaign – and it is a campaign — is one to ensure that the Democratic Party’s coalition of minorities remains engaged in the political process ahead of the 2014 midterms. Minority turnout fell 4 percent in 2010 from a 2008 high, though Democrats benefited from a high turnout among minorities in 2012. A Democratic goal is to ensure that minority voters have a stake in turning out next year when the nation’s first African-American president is not gracing the top of the ticket.

Before Holder’s announcement, however, Republican officeholders were leading the way on reforming a drug enforcement system which criminalizes non-violent drug offenders in counterproductive ways which do not reduce criminality but do result in an undue burden on the taxpayer. Indeed, Holder’s reform mirrors those instituted by New Jersey’s Republican Gov. Chris Christie.

In July, Christie signed a bill which expands eligibility for a drug court program the former prosecutor instituted upon ascension to the governor’s mansion. The bill, co-sponsored by his political opponents in the Democratic-controlled state legislature, allows non-violent drug offenders the ability to receive treatment rather than prison time. Indeed, these reforms reflect Christie’s personal view that treatment for non-violent drug offenders is a more effective means of ensuring that the convicted, often addicts themselves, less susceptible to recidivism and do not burden the state’s prisons with overpopulation.

For Christie, a reform conservative who cannot seem to find much common ground with the GOP’s ascendant libertarian wing, the prospect of reforming drug policy has resulted in a rare moment of consensus. His preferred rhetorical sparring partner, Sen. Rand Paul (R-KY), has already introduced a bill with Sen. Patrick Leahy (D-VT) to reform mandatory minimums and allow for more judicial discretion in the sentencing process. Paul has, in the past, spoken out against sending non-violent drug offenders to prison rather than treatment programs.

The GOP, often perceived as too conservative by the majority of the electorate, would upend that perception by abandoning its culturally conservative attachment to mandatory sentencing for drug offenders. Such a policy would disorient Democrats by forcing them to agree with the GOP’s reformist elements. Furthermore, it would serve as an effective counter to the refrain that Republicans in Congress are motivated solely by opposition to Obama which has resulted in the unnecessary obstruction of the business of government.

Part of the platform that Republican sources told York they wish their party’s members were advancing should be to praise Holder’s decision to reintroduce judicial discretion into the sentencing phase for non-violent drug offenders. They should then remind the electorate that Republican politicians are among those championing and implementing these reforms in recent years.

Of course, the GOP could allow Holder and the Obama administration to seize the high ground of reforming drug policy. For a party seemingly content to be buffeted by events rather than take initiative, this outcome would not be surprising in the least.