White House Says Debt Ceiling Triggers ‘Onerous To Both Sides,’ But What About The Tea Party? 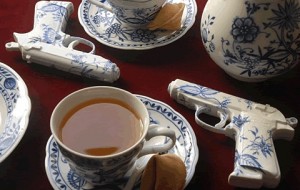 At Monday’s White House briefing, Press Secretary Jay Carney fielded a lot of questions about how, exactly, the new debt ceiling deal constitutes a “compromise.” As CBS News’ Norah O’Donnell pointed out, Democrats “got nothing.”

Carney pointed to the measure’s “Super Congress” committee as an opportunity to take a second crack at a balanced approach, and to the trigger provisions as an incentive for Congress to reach such a deal. I asked Carney if it was realistic to think that Tea Party congressmen would vote for revenue increases, even in the face of defense cuts.

The so-called compromise contains no revenue enhancements. It does create a “Super Congress” that will be charged with achieving further deficit reduction, and the theory is that their plan will contain revenue. If Congress fails to pass the “Super Congress” legislation (which will not be subject to amendments or filibuster), deep across-the-board ($1.2 trillion, half in defense, half non-defense) will kick in, which the White House believes gives both sides a powerful incentive to reach a deal.

Carney repeatedly explained what a powerful incentive the “Super Congress” would have to reach a deal, since the trigger provisions would be “onerous for both sides.”

Both sides? He seems to be forgetting the side that got us into this crisis in the first place:

Tommy Christopher: …you talk about the triggers being onerous to both sides.  But I mean there’s really a third side involved here, the Tea Party.  If the threat of default didn’t make them blink, what makes you think given the opportunity to defeat revenue increases that they won’t say, sure, you know what, cut away, it’s right in our briar patch?

MR. CARNEY:  Well, I think that the trigger mechanism is devised in a way that there is unpleasantness for everyone in pretty much every political persuasion up on Capitol Hill, and that if we get to that — we hope we don’t — there will be — or when we get to the stage of making choices about voting for what the joint committee produces that there is an assessment made by the leadership in both parties and others that — again, this is a lot of ifs here, but that what will have been produced by the joint committee to achieve this significant further deficit reduction is a far better approach than what would happen if the trigger was pulled.  We simply believe that.

That’s why it’s so important to have a kind of mechanism like that.  And it’s very similar, by the way, to the mechanism that was in place through Gramm-Rudman-Hollings that led to the 1990 budget agreement, which was the first of three budget agreements which laid the groundwork, created the foundation for, as I mentioned before, the longest peacetime expansion in American history, and the creation of 23 million jobs in the 1990s.  So the threat of these triggers being pulled can force Congress to do significant things that can be very, very good for the economy.

What Carney says is true, but no previous President, or Congress, has had to deal with a Tea Party with the strength and inclination to decimate this country rather than tax a billionaire. They were willing to tank the entire US economy to avoid giving the government any revenue to close the deficit, and to choke off as much money to the government as they could. Deep, across-the-board cuts are supposed to be a punishment to them? Besides, they know that the defense cuts will be blamed on the Democrats, and as long as they put the words “job-killing” in front of everything they don’t like, they’re golden. “Waiter, I did not order a job-killing medium-rare steak!”

What’s worse is, the Democrats know they’ll be blamed for defense cuts, so they’ll cave on revenues in the “Super Congress,” and that will leave only the expiration of the Bush tax cuts. Maybe a good way to raise revenue would be to take bets on the Democrats holding the line on that.