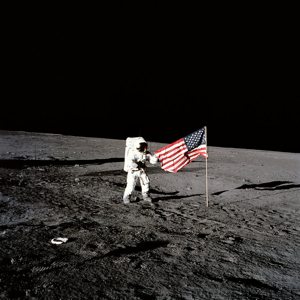 The 40th anniversary of the moon landing yesterday saw slews of retrospective coverage: lots of listicles, lots of “first time X happened on the moon” stories, a pretty dope column by Buzz Aldrin, and a few pieces that looked forward.

But in an effort to “spice things up,” a good number of these stories introduce drama and conflict in the form of moon landing conspiracy theorists, or “truthers,” who believe the whole thing was faked. The thing is, there aren’t actually very many of these people. As the South Florida Sun-Sentinel‘s Joel Burnstein put it,

Moon conspiracy coverage ranges from scolding to waffling. ABC News‘s “Refuting the Most Popular Moon Landing Hoaxes” mostly goes through the NASA website’s 2001 moon hoax rebuttal page (and what a page!) and talks to a guy named Germann to prove that Moon Truthers are nuts. National Geographic‘s article on the same does a much better job of justifying its existence, if only because it interviews people other than the president of the Central Missouri Astronomical Association and an FAQ page, and has a nifty photo gallery.

CNN‘s moon hoax article plants its flag in the soft soil of equivocation. It starts out with the standard “to some” formulation (“It’s arguably the greatest technological feat of the 20th century. And to some, it was all a lie”) to show that this is just the opinion of some people, and that’s OK. It becomes a “he said, she said” story (sample line: “Critics of moon-landing hoax theorists, and there are many, say it would be impossible for tens of thousands of NASA employees and Apollo contractors to keep such a whopping secret for almost four decades.”) Where one of the “he”s happens to be that crazy guy who Buzz Aldrin punched for stalking him, and who appears to be a fraudster himself:

Google News lists a decent number of local stories that take a similar tack, only it becomes a “local man” who’s the denier.

Maybe moon conspiracy theories get so much play because moon truthers have such a big web presence, or simply because non-truthers (read: People who know the actual truth) think they’re funny to read about. Do they really change the world much one way or another? Probably not, and they probably aren’t worth fretting about too much. But their ability to pop up whenever the moon landing is mentioned shows the power of the fringe to hijack the real story, and that’s no laughing matter.