Who is Evan McMullin?

Who is Evan McMullin, the CIA Vet Entering the Race For the Presidency? 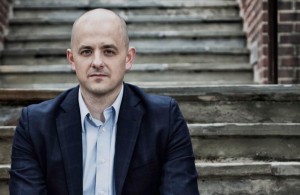 Despite the fact that we’re well past the major party nominating conventions — and outsider candidates Gary Johnson and Jill Stein have already earned themselves healthy headlines — there would appear to be a fifth contender throwing his hat into the ring for 1600 Pennsylvania Avenue.

And no, you’ve never heard of him.

In fact, Evan McMullin — the veteran of the CIA who serves as the chief policy director for House Republicans — has never even held elected office. But, as Morning Joe first floated this morning (and shortly confirmed by Buzzfeed), McMullin is the candidate that some conservatives are ready to “put good money behind,” according to Joe Scarborough.

From the ashes of the #NeverTrump movement that was all but squashed by the real estate mogul and his Twitter feed, McMullin never even had a Wikipedia page until this morning according to Bloomberg’s Mark Halperin. He is a graduate of BYU, and holds a MBA from Wharton School of Business at the University of Pennsylvania (same alma mater as Donald Trump) and put in over a decade of work for the CIA. He also worked with the United Nations vetting refugees, and also worked for Goldman Sachs.

Despite being relatively inactive on Twitter, the newly-emerging candidate has been at it today, declaring why the two primary candidates are “fundamentally unfit” for the role of Commander in Chief.

We have been left with two candidates who are fundamentally unfit for the profound responsibilities they seek.

Hillary Clinton fails the basic tests of judgment and ethics any candidate for President must meet.

Donald Trump’s infatuation with strongmen and demagogues like Vladimir Putin is anathema to American values.

Millions of Americans are not being represented by either of these candidates.

On the newly-launched evanmcmullin.com, he addresses his potential voters with an open letter that reads in part:

Like millions of Americans, I had hoped this year would bring us better nominees who, despite party differences, could offer compelling visions of a better future. Instead, we have been left with two candidates who are fundamentally unfit for the profound responsibilities they seek.
…
Millions of Americans are not being represented by either of these candidates; those of us who care about the strength of the military and intelligence services find little to embrace in either Trump or Clinton.
…
Just as the American Revolution required men and women devoted to liberty and freedom to stand up and be counted, this moment calls a new generation to the same sacred task. With that in mind, I have decided to pursue the cause of American renewal and the Presidency of the United States of America.

McMillin is an independent candidate for President, and has one week to make the ballot in the state of Utah.