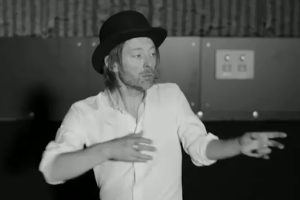 We don’t get to a lot of straight up music news around these parts, mostly only focusing in when popular musicians say something provocative, evocative, or downright weird. However, one of the biggest bands in the world, Radiohead, released a new album today and judging by the fact that the name of the album, the name of the first singer, and the name of the lead singer are all trending on Twitter, people are certainly noticing. Of course, after the “Who is Arcade Fire?” controversy, I am no longer presuming anything about what people know or care about in the music world.

This past Monday, Radiohead announced the album would be available tomorrow. However, I guess the band decided just releasing it wouldn’t be interesting enough (“newspaper packaging” notwithstanding) to follow up the big “pay whatever you want” experiment from their last album, so fans woke up today to find the new release, “The King of Limbs,” available a day early.

Like they’ve done with past records, Radiohead has eschewed the constraints of CDs (and even Vinyl releases) instead choosing to allow users to download the record (though unlike previous “records” this was not released for free.”)

Really though, I only wrote this post so I could embed the video for the album’s first single “Lotus Flower” below and copy our own Colby Hall’s reaction to it because it made me laugh out loud:

“Somehow the once shy and taciturn Thom Yorke has evolved into the bastard child of Mick Jagger and Michael Stipe.”

So true. The amazing dancing in this video is a bigger gift to the world than a day-early album could ever be. Enjoy it below: