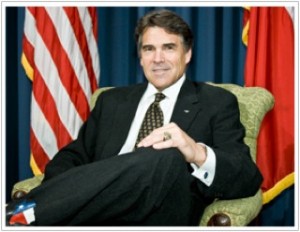 For all of the drama and tension and tumult of the Presidential primary process, there’s only one thing that matters: 270. Of course, that’s the number of electoral votes a candidate needs to assume the Presidency.

Let’s first look at the reasons why Romney would win without Perry in the race: He’s leading in the primary polls, of course, and has been for some time. But Romney is also increasingly seen as the candidate from the pre-Perry pool with the best shot not just at beating the other candidates, but at beating Obama. That’s important: the more people want to oust an incumbent, the more concerned they become about making the right choice.

Take for example the Democratic primary race of 2004; the Democrats were desperate to oust George W. Bush from office. At first, outsider Howard Dean mobilized the party’s base by hewing a strong anti-war line, but soon people began to fear that Dean was perhaps too much of an outsider to win in the general election. (This why the Dean scream hurt him so much – it reinforced concerns about his broad appeal.) The party eventually settled on the much safer, if less exciting (and excitable), choice of Senator John Kerry, who was unable to inspire much passion and ended up losing by a reasonable margin.

Of course, the Republican party isn’t the Democratic party. As we saw last year, state voters were more than willing to challenge incumbent Democrats with more exotic, less-certain candidates. (Think: Sharon Angle vs. Harry Reid). But the role and impact of Tea Party protest voters will most likely be diminished at the national level. The Republican primary process is generally viewed as being far more tightly controlled than the Democratic one – the “establishment” candidate is almost always the one who wins the nomination (i.e. Bush in 2000 and 2004, McCain in 2008.) Most states primary process are winner-take-all, which means that losing individual contests, even by a point or two, have a dramatic impact on a candidate’s chances. (The Democratic party has proportional allocation of delegates; this is, in part, what allowed Hillary Clinton to continue her campaign in 2008 long after it was clear she couldn’t surmount Obama’s lead.)

Party influence aside, the calculus that Romney is the strongest of the current pool of candidates (without Perry) against Obama is probably correct. There is likely no more frightening an opponent to the President’s camp. And it gets worse if Romney does as he’s suggested he might and taps Marco Rubio to be his VP. Obama-Biden versus Romney-Rubio is a tough, tough fight for the President.

What people may not realize, though, is that Romney is the strongest candidate against Obama even with Perry in the race.

It comes down to that 270. Ronald Brownstein at the National Journal did a good overview of the states Obama needs to win in order to hit the magic number. It’s a different – and narrower – group than he took in 2008. The question for the Republican party is: which states can they take from Obama?

There isn’t state-by-state polling yet contrasting Obama with Romney and Perry. But some states are obvious. Obama is likely to take California, Massachussets and New York (the Post‘s wishful thinking aside) and most of the Northeast. And just as predictably, any Republican candidate will almost certainly take the South. The battlegrounds will be many of the same we’ve seen before: Ohio, Pennsylvania, Florida, Nevada, Michigan, North Carolina.

This is where Romney has a steep advantage over Perry. As in the poll above, Romney does well with independent voters. He also has links to two of those states. His father, George, was governor of Michigan for years; he leads Obama there now by five points. Nevada has a large Mormon population, which could make the difference in a tight race. Pair Romney with Rubio as VP, and you can pretty much put Florida’s electoral votes into the bank as well. Michigan plus Nevada plus Florida: that’s 51 electoral votes, nearly one-fifth of the total needed.

In the battleground states, Perry, by contrast, has… not much, Texas cheerleading aside. His newly pronounced opposition to Medicare and Social Security won’t help him much with older voters, and the on-going debate over the execution of Cameron Todd Willingham is unlikely to die down. One thing he does have: the public image of being a rootin’-tootin’ Texas cowboy. While the image of George W. Bush has improved since he’s left office, it’s still not a link that many politicians would choose to make, particularly when trying to woo swing voters from Northern states – and while the President is running a campaign that, in part, will blame the economy on his predecessor.

Even the Rubio VP addition is trickier for Perry. Perry moved hard to the right on immigration over the past few years, angering some Latino organizations and voters – and potentially diminishing voter enthusiasm for a ticket including the first Hispanic candidate. Romney doesn’t have that problem, potentially bringing more states with large Hispanic and Latino voting populations into play.

Romney is playing the primary season smart, running not against his opponents, but against Obama. He’s toeing some middle-of-the-road positions – partly because he’s stuck on his record, partly because he doesn’t want to be pinned too far to the right. Perry, on the other hand, is drawing (and has drawn) very clear lines in the sand – ones that he might come to regret in a general election. Perry is a staunchly conservative Republican, for good or bad.

The beautiful thing about American politics, of course, is that the people are the ones who decide on their leaders. We’re about to begin a primary season in which voters decide who they want to face Obama. Some will vote based on who they think can win; others will vote based on who best matches their own political philosophy. Republican leaders will try to steer the ship in the direction they want to go, but that’s tricky. Many will likely soon decide that they want to head directly for Mitt Romney – and it would probably be their best bet to do so.

But, as we learn repeatedly – it’s not always up to them.