Wait…Did Herman Cain End The Debate With A Line From A Pokemon Movie? 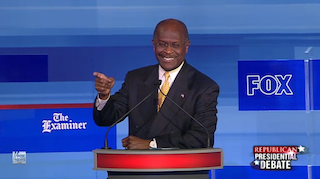 Last night, while giving his final comments in the GOP debate, Herman Cain told the crowd, “A poet once said, ‘life can be a challenge, life can seem impossible, but it’s never easy when there’s so much on the line.'” It’s a nice quote, right? Well, a Google search doesn’t reveal any poems with that line. However, Daily Intel was able to determine the source of the quote: the theme song to the film Pokemon: the Movie 2000.

Forget “Mickey Mouse games.” It looks like at least one candidate is serious about catching them all.

Yes, Cain seems to have been quoting “The Power of One” by Donna Summer which was played over that movie’s credits and was the first track on its soundtrack.

Pardon my French, but what the Brock? Is this a new thing? Is Michele Bachmann going to start claiming that she has both the touch and the power?

It gets even weirder.

Daily Intel did some further searching and discovered that Cain has used the quote at least three other times in the campaign so far. They surmise that Cain may have watched the movie with his grandchildren, liked the song, and decided to use it but forgot where it was originally from. That can’t be it though, can it? I mean, how could not a single person on his staff check out where a quote that they were going to make one of the touchstones of the campaign was from? They couldn’t have just chosen a random tune off their iPod without doing a little background. Someone had to know! They just had to!

The only explanation that I can think of that doesn’t make my head explode is that the lyrics were appropriated and put into an actual poem or the other way around. It has to be a coincidence. But, like I said, Google can’t find anything.

All I know is that this is officially my favorite story of the 2012 election. And I can’t wait till Cain ends his next debate with quotes from that movie. I imagine it will go something like this:

Below is the video of all the closing statements from Fox News. The poem comes at 1:10. After that is a wonderful fan video on YouTube of Summer’s song with some lovely visuals. See if you get as inspired as Cain.

Watch all the clips of Cain using the quote here.