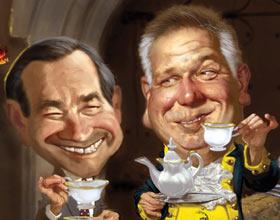 We know Glenn Beck can sell books, but can he kill magazines? The Weekly Standard may be about to find out. Beck’s radio show producer Stu Burguiere called for a boycott (he later retracted…sort of) of the magazine on his blog today after reading this week’s cover story on Glenn Beck (specifically ‘Rick Santelli, Glenn Beck, and the future of the populist insurgency’). Says Burguiere:

Look, we usually love The Weekly Standard. They are typically an extremely useful and important source of analysis (I think?). But, this is horrible. It’s a hit piece barely worthy of Media Matters, and I’d rate it as impossible that the author doesn’t know it.

The author of the piece happens to be Matthew Continetti, a fairly well-known and respected conservative writer. Here are the three lines from the five page article Stu takes particular issue with:

Beck’s book Arguing with Idiots contains a list of the “Top Ten Bastards of All Time,” on which Pol Pot (No. 10), Adolf Hitler (No. 6), and Pontius Pilate (No. 4) all rank lower than FDR (No. 3) and Woodrow Wilson (No. 1). In Glenn Beck’s Common Sense Beck writes, “With a few notable exceptions, our political leaders have become nothing more than parasites who feed off our sweat and blood.”

This is nonsense. Whatever you think of Theodore Roosevelt, he was not Lenin. Woodrow Wilson was not Stalin.

So what’s the big deal exactly? Stu is up in arms that Continetti did not make it clear “this segment from the book is a joke.” And he’s right, Continetti didn’t (though honestly, a regular watcher of Beck’s chalkboard would be forgiven for drawing a broadly similar conclusion). That said, me thinks Stu doth protest way too much. What I find fascinating about Stu (and by obvious extension, Glenn Beck’s) overzealous response to the story is that it is actually a good article. It’s one of the few times to my knowledge that a serious publication has treated Beck seriously, without resorting to all the usual hoo-ha over his chalkboard antics and tears. Being treated seriously is something Beck clearly craves — alas, perhaps the reality of stepping out of the vacuum is less pleasant in reality than in theory. Here’s what directly follows the portion Stu reacted to:

The philosophical foundations of progressivism may be wrong. The policies that progressivism generates may be counterproductive. Its view of the Constitution may betray the Founders’. Nevertheless, progressivism is a distinctly American tradition that partly came into being as a way to prevent ideologies like communism and fascism from taking root in the United States. And not even the stupidest American liberal shares the morality of the totalitarian monsters whom Beck analogizes to American politics so flippantly.

And there in a nutshell is much of what is missing from Glenn Beck’s version of American history. Reasonable context. In fact much of the article hits Beck’s weak points right on the head. Not to mention it’s all articulated calmly, which is maybe what sent the Beck people over the edge…outrage and hyperbole are so much simpler and easier to dismiss.