Why Isn’t The Media Condemning All the People Supporting the Dallas Shooter? 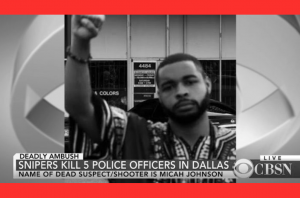 I wrote here earlier this week that the fragmentation of modern media has transformed our country into the Divided States of America where we all now live within in our own little tribes, encased in separate bubbles of self-serving reality. Sadly, the horrific events in Dallas and the public reaction to the deaths of the innocent police officers which resulted from them, are further proof of the dangers of this reality.

There is no doubt that, led by the Drudge Report, some in the conservative media (including myself, though later I was wrongly convinced this seemed more like an ISIS attack) rushed to the instant judgment that this massacre was motivated by black racism against police and was in some way tied to the protests of two recent controversial killings of black suspects in other parts of the country. Sometimes those who rush to judgment turn out to be right, and it appears that is what happened in this case. That doesn’t change the fact that these snap reactions where based largely in our own biases about the way the world works.

While there has been near universal condemnation of the killer (killers?) among the political leadership, I find it appalling and misguided that the Congressional Black Caucus chose to focus the majority of their energy on immediately pushing for gun control. In my view, it would have been far more appropriate at this time of crisis if they had used their influence to defend police in general and remind their community that anyone who does not denounce this outrageous act in the strongest terms is not only wrong, but also doing great harm to both their political cause as well as the culture of the country.

If you naively think that such a message is so obvious as to not be necessary, then you clearly have not been spending much time on Twitter or Facebook today.

I was simply horrified when I did a simple search of the Twitter trend “Micah Xavier Johnson.” While it is absurd to blame an entire race of people for the nonsense that a few nutjobs might spew on social media, the insanely positive reaction voiced by black people (and even a few very liberal whites) for the killings was nowhere near an aberration. I can’t stand it when the news media routinely cherry picks a couple of random tweets from anonymous nobodies to try and justify a narrative they like, but this, unfortunately, is FAR from that (though, oddly, my guess is that the mainstream news media will be conveniently ignoring this entire issue).

I saw many postings (several with hundreds of “likes” and “retweets”) from black people who have been infuriatingly supportive of the man who wanted to kill “white people” and end up assassinating several completely innocent police officers. I’m not talking about the usual conspiracy nuts who insist that Johnson wasn’t really the shooter. That isn’t that unusual in cases like this. What I saw was flat out praise for Johnson’s actions. Perhaps even worse than that, there were numerous blacks who were being viciously attacked for having the gall the criticize those who would publicly support/justify such a heinous crime against humanity.

To my knowledge (and I have searched hard to find it), not one major “black leader” has had the guts to call out this outrageous reaction. It was bad enough when blacks cheered O.J. Simpson largely without rebuke. At least he was a well-known celebrity and his crimes, while horrendous, were not directed at our entire societal system. This is a whole new level of insanity and delusion.

This shows that there is a culture, at least within the massive online black community, where, even if it is not nearly the majority view, it is more than acceptable to think is it somehow justifiable to kill whites/police out of revenge for events which we still don’t yet even fully understand. A large part of why this is the case is because, in the modern media environment, black people, just like many other demographic groups, have been able to live in a world where they almost never are forced to ingest information which challenges what they want to believe about the world. When “Black Lives Matter” is still allowed to have wide-spread credibility even after “Hands Up, Don’t Shoot!” turned out to be a total lie, then truth means absolutely nothing.

As the news media refuses, as it seems to have done so far, to even address the black online support for these soul-crushing murders, it will further prove this point. Can you imagine the outrage in the news media if the Charleston murderer Dylann Roof had been widely supported online by whites and no one in the white community, or conservative media, had immediately condemned that response? It would obviously be a huge part of the story’s entire narrative. In this situation that’s not allowed because, under the media’s absurd rules of political correctness, it would somehow be “racist” to criticize black people. As George W. Bush used to say, this is a classic example of the “soft bigotry of low expectations.”

The danger of this lack of outrage is not just the obvious deepening cultural divide that it further exacerbates. Much like when elements of the Muslim community fail to make it impossible for those in favor of Islamic Terrorism to coexist within their ranks, it helps foster the conditions under which something like this horrible tragedy is almost certain to happen again.
—
John Ziegler is a nationally-syndicated radio talk show host and documentary filmmaker. You can follow him on Twitter at @ZigManFreud