Why Ken Cuccinelli Lost, and What It Means for the GOP: 7 Must-Reads

Why Ken Cuccinelli Lost, and What It Means for the GOP: 7 Must-Reads 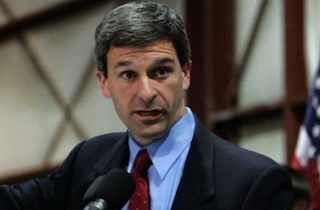 “The fact that we have to fight over the framing implies that revisionist history is often more opportunistic than accurate,” Matt K. Lewis wrote Wednesday morning about the season’s most portentous election between conservative Republican Ken Cuccinelli and Democrat Terry McAuliffe.

But that’s not going to stop anybody from trying to draw lessons and narratives from yesterday’s election results. Republicans are reading Terry McAuliffe’s narrow margins as a referendum on Obamacare, while Democrats are already interpreting the election as a rejection of tea party politics; meanwhile both sides are claiming victory in the war over social issues.

So was Cuccinelli’s loss the result of his conservative social views, not running on Obamacare soon enough, not getting enough RNC funding, or simply a poorly-run campaign? The seven articles below break it down.

Did Terry McAuliffe Win, or Did Ken Cuccinelli Lose? (Matt Lewis, The Week)

Lewis bemoaned what could have been in Virginia, where defeated candidate Ken Cuccinelli upset Bill Bolling as the heir apparent to Bob McDonnell by making the nominee selection process a convention rather than a primary, slipping many of the more conservative candidates onto the ballots—a gambit that does not seem to have paid off. But rather than rending garments over the choice of candidates, Lewis catalogued the mistakes of the campaign, including burning bridges with Bolling’s people, going too negative in ads, and the apparent decision to distance Cuccinelli from McDonnell, who remains relatively popular despite several scandals. (For a different view on this last point, see Ben Domenech‘s autopsy in The Federalist.)

Implicit in Lewis’ postmortem: the specific mistakes of Cuccinelli’s campaign, rather than any policies inherently distasteful to Virginia’s shifting electorate, are to blame for his loss. The closest Lewis came to suggesting that Cuccinelli was perhaps too conservative a candidate to win was critiquing his “style” of too stridently expressing his views.

“This is not to say Cuccinelli should have moderated,” Lewis wrote, “but it is to say that it’s usually a mistake to believe that you can prove you’re right through debate and intellectual discussion. In short, he often seemed to care more about winning the argument than winning the election.”

Charmaine Yoest, president of Americans United for Life, didn’t buy that Cuccinelli’s social conservatism actually cost him, noting that his polling trended up in the final days—suggesting he was riding a wave of anti-Obamacare sentiment that might have given him the election if it were held in a week or two:

Legendary football coach Vince Lombardi once observed of a defeat: “We didn’t lose the game, we just ran out of time.” It’s an apt way to reflect on Ken Cuccinelli’s loss in Virginia tonight. He came up short, but finished dramatically stronger than expected, largely because he was gaining traction from the implosion of Obamacare. Terry McAuliffe doubled down on his support for the failed Affordable Care Act, and lost his double-digit lead. Cuccinelli was closing fast in the last week but didn’t have enough time.

Yoest also parsed the claim that Cuccinelli lost the woman vote, pointing out that he actually won among married women. Given the victory of Chris Christie—a pro-life candidate running in a solidly blue state—Yoest ended up agreeing with Lewis that the loss was more an issue of “framing.”

…And He Took A Chunk of Obamacare Out With Him (Michael Barone, Washington Examiner)

The Obamacare rollout fiasco and Obama’s lies hurt Democrats. You only have to look at Democrat Terry McAuliffe’s narrow 48 percent to 46 percent margin in Virginia to see that. McAuliffe outspent Republican Ken Cuccinelli by a wide margin (as much as 10-to-1, some bloggers suggested) and was leading 46 percent to 37 percent in the last days of October in the Real Clear Politics average of recent polls on Oct. 31. In Virginia, the state that voted closest to the national average in the last two presidential elections, McAuliffe ended up with 48 percent, 3 percentage points behind Barack Obama’s 2012 percentage of the state, while Cuccinelli’s 46 percent was just 1 percentage point behind Mitt Romney’s showing.

Did Obamacare hurt? Well, the exit poll showed Virginia voters opposed rather than favored it by a 53 percent to 45 percent margin.

Ken Cuccinelli Definitely Lost, and Obamacare Had Zip to Do With It (Greg Sargent, The Plum Line)

Sargent pointed out that of those voting, only 27% ranked Obamacare as an important factor in their decision, and Cuccinelli only won that group by four points. Both numbers would have been higher had there been some sort of last-minute surge in anti-Obamacare sentiment. Sargent, who’s consistently picked the nits of Obamacare’s poll numbers, examined the 53% disapproval rating cited by voters in Virginia exit polls, and reminded readers that some of that disapproval comes from people who don’t feel the law goes far enough.

Combine the lack of intensity about Obamacare with the mediated disapproval of it, Sargent argued, and you get a very different picture of the electoral motivations of those who voted yesterday. “If we must draw a conclusion about Obamacare here,” he wrote, “it probably should be that scorched earth opposition to it isn’t nearly as widespread or fervent as its foes claim.”

McAuliffe, a former Democratic fundraiser, vastly outspent his foe. Did this turn the tide? Maggie Gallagher at the National Review did not mince words in an angry post last night:

They said he was “unelectable.” The RNC put only $3 million into this race. Ken was outspent by a margin of something between 4:1 and 10:1, if you believe the Associated Press.

The Democrats poured everything into trying to lie to voters and portray Cuccinelli as an extremist — and they barely pulled this one out.

Would another $3 million have swung 50,000 votes? The Republicans, starting with Bill Bolling, who undercut Cuccinelli as unelectable have egg all over their faces.

This was a winnable election. How did we give this away to Terry McAuliffe? Some serious soul-searching should be taking place among the anti-tea-party faction.

“It’s worth observing that any Democratic statewide victory in a purple state in an off-year election is a pretty remarkable accomplishment, given the turnout patterns that typically prevail in these events,” Kilgore wrote.

Tea party favorite Ken Cuccinelli believed attacking McAuliffe’s record, running against Obamacare, and sticking firm on social issues and guns would be enough in an off-year election to win the state. This is the mistake too many right-wingers make, namely that if the electorate is tweaked just right and every single one of their voters can be dragged to the polls that victory will be theirs. This is misguided in all but deep red states and jurisdictions. Even in Virginia, the electorate is far too diverse, socially tolerant and desirous of good government to line up behind a strong ideologue whom they fear will engender more partisan fighting. To be blunt, even a sleazy pol with no real agenda can beat a right-wing hardliner in Virginia.