Will Herman Cain’s Reaction To ‘N*ggerhead’ Controversy Hurt Him With Conservative Base?

Will Herman Cain’s Reaction To ‘N*ggerhead’ Controversy Hurt Him With Conservative Base? 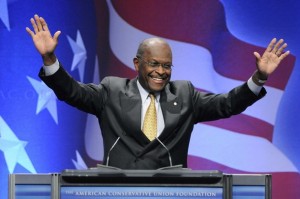 As the fallout from the Rick Perry “Camp N*ggerhead” controversy continues to build, an interesting peripheral question has emerged: How will this controversy affect the rising candidacy of Herman Cain, whose denunciation of Perry elevated this from a mere “hit piece” from the “liberal media” to an intramural fight among Republicans? The perfect storm of the “race card” and Cain’s use of a word that’s arguably as inflammatory to the conservative base as the n-word – “sensitivity” – could spell trouble for Cain’s meteoric campaign.

This particular Cain vs. Perry bout poses an interesting dilemma for the conservative base. The energy around Cain is nuclear, and is truly a grassroots phenomenon. While he has exploded onto the national radar with his resounding victory in the Florida straw poll and rocket ride to the top of the polls, the conservative faithful have been heaping adulation on Cain for a long time now. At this year’s CPAC in February, “I love Herman Cain” was the mantra on everyone’s lips. In a straight-up battle of true enthusiasm, Cain beats Rick Perry every time.

On the other hand, Cain’s denunciation of Rick Perry cuts deeply at the conservative base’s defensiveness about racial issues. The standard operating procedure for conservatives, even black conservatives, is to deride any issue involving Republicans and race as “playing the race card.”

Cain, himself, has recently been under fire from the media for remarks that he made about black voters being “brainwashed,” and likening the Democratic Party to a “plantation.”

Now, Cain is on the other side of that equation, attacking a conservative over an issue of race. For the conservative base, Cain’s response could be a double-whammy, as he invoked the dreaded “S-word” in his response to This Week‘s Christiane Amanpour, saying that Perry’s attendance at the camp “shows a lack of sensitivity.”

This is exactly the kind of talk that got Rick Perry drummed out of the GOP primary lead, when he said conservatives were “heartless” if they opposed in-state tuition for the children of undocumented immigrants. As my friend and former colleague Matt Lewis pointed out to me, good conservatives have traditionally only used the dreaded “S-word” with the prefix “hyper.”

It’s early yet, but this controversy is shaping up to be the stake through the heart of Perry’s already-troubled campaign. Even conservatives who side with Perry will likely have to concede that cutting through the thick cloud of coverage around this promises diminishing returns. What are the chances that anyone is going to come out of the woodwork to defend their trips to camp “N*ggerhead” with Rick Perry?

If Perry is, indeed, finished, then the blame for his demise falls squarely on Herman Cain’s shoulders. While the Post‘s reporting was solid, there were solid grounds for criticism, especially from a conservative base that’s already suspicious of mainstream journalism. Cain’s denunciation effectively destroyed that line of defense, and placed the story into a Republican-on-Republican frame that’s a no-win for conservatives. Allowing Perry to go down in flames will reinforce mainstream notions about conservatives and race, but so will attacking Herman Cain.

So far, I haven’t seen much criticism of Cain, which is a good sign for him. If the conservative base’s love burns as brightly for Cain as it seems, The Daily Caller’s Matt Lewis lays out the manner in which they can “forgive” Cain:

Cain’s comments were — at best – premature — and at worst, highly irresponsible. It was a cheap shot, and, perhaps a signal that Cain is willing to play the race card against a fellow Republican when it benefits him.

The fact that Cain spoke out so soon — basing his comments on a newly-posted and thinly-sourced article, published by an outlet many conservativs believe to have a liberal bias — speaks to Cain’s lack of political judgment.

While it’s probably too late for Perry, conservatives can “rescue” Cain by reasoning that he was “taken in” by the lamestream reporting of the Washington Post. Or, they could go with Redstate/CNN pundit Erick Erickson‘s comparison of Cain to conservative race bogeyman Al Sharpton:

Herman Cain jumped into the fray on the Perry attack expressing moral outrage or something. I think he might have been doing his impression of Al Sharpton in the level of outrage he was willing to drum up to be outraged over what Hugh Hewitt called a “drive by slander.” Maybe he should have been outraged at the reporter for the hit job instead of at Rick Perry for Perry’s daddy painting over a racial slur.

Erickson’s comparatively mild shot at Cain, it should be noted, looks more like a pro forma matter than anything else, as it was buried in a pile of musings, rather than it’s own post. Cain’s standing in the polls will ultimately tell the tale, but if conservative opinion-makers continue to hold their fire, he stands a chance.

On the other hand, as coverage of this issue intensifies, the effect could very well be to forge an ever-stronger association between the GOP and issues of race. If and when that happens, the conservative base’s love of Herman Cain will truly be put to the test. Democratic Fox News contributor and Daily Beast columnist Kirsten Powers tells Mediaite that Cain’s denunciation was a misstep that will hurt him with the base:(via email)

It was a mistake and shows he doesn’t really understand the psychology of the GOP base. First, there are a lot of contradictions in the reporting — some say that Perry was offended by it and the rock was turned over. Others say they saw it in the last few years. Because conservatives don’t trust the MSM, they will err on the side of assuming the MSM is out to destroy Perry and playing racial politics. Some will also see this as Cain “playing the race card” to gain support. I don’t agree with this assessment, but this is how the base likely will view it. What I would say is Cain should have waited until all the facts were in before assuming that what was reported was true. I think the base will resent Cain being used by liberals and the MSM to accuse a Republican of being a racist.