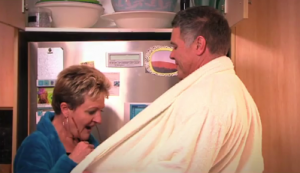 In Australia, a woman named Libby Ashby has been disfellowshipped from her church after appearing in an erectile disfunction ad appearing on late night TV. The ad features a couple discovering a rather unorthodox use for a hard appendage. In the realm of ED ads, it’s pretty tame and actually pretty darn funny. At least it doesn’t make viewers’ think of a famous football coach’s junk. For that it should be commended.

Ashby spoke about the ad on Melbourne’s 3AW News Radio. While DJ Nick McCallum repeatedly stressed how “tacky” and “tasteless” the ad is (Come on, dude, lighten up. It’s about as offensive as a mild Benny Hill sketch), Ashby remained firm, apologizing if she offended anyone but pointing out that she has three children to feed. She also made some good points about how much better it is that people can talk about the subject these days and also that it’s apparently much easier to sell ED products when humor is employed.

Look, actors need to act. And, while the clip is a little ribald, it appears to be about an everyday married couple who just happen to have sex. Churches are always stressing sex after marriage. Do they suddenly have a problem with sex a ways after marriage? Besides, the ad isn’t half as bad as some of the crap that my actor friends have done for money (seriously, if anyone else invites me to one more modern day Shakespeare “reimagining,” I’m defriending them on Facebook). If there’s anything that Ashby should learn from the situation, it’s not that she needs better judgement. It’s that she needs a better church.

Check out the ad below. Click here to listen to the 3AW interview with Ashby.