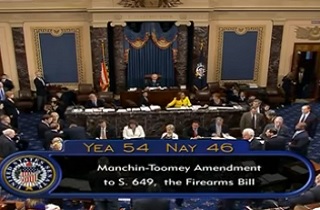 The compromise on background checks for gun purchases, negotiated by Sen. Joe Manchin (R-WV) and Sen. Pat Toomey (R-PA) and seen by many as the last, best chance to get any significant gun reform passed in the wake of the Newtown mass shooting, was voted down this afternoon despite receiving a majority of the votes. The 54 “yes” votes, including four Republicans, were not enough to cross the 60-vote threshold needed to overcome a Republican filibuster. Reporters on the scene reported members of the Newtown families crying in the gallery as the result became clear, and as Vice President Joe Biden announced the amendment had failed, a woman yelled “Shame on you!”

Conventional wisdom says that this vote effectively kills any significant legislation on gun reform, be it background checks, or the much politically-tougher bans on assault weapons and extended magazines. Barring some immediate tidal uprising of constituents, or something like that, this might be the end of the line for this round of proposals.

It could also turn out to be the insult that tips the scales of enthusiasm in favor of gun reform. This amendment got more votes for it than against it, and if Americans are anything, they are fair-minded. Come 2014, they have an opportunity to show the Republicans who forced this amendment down with a filibuster, and the Democrats who joined them, that some things are too important to mess around with, some trusts are too sacred to abdicate with undemocratic gimmickry. More of the people we put in office voted for this amendment than against it, yet the cowards won by putting their thumbs on the scale. The families who lost so much in Newtown, and the next families to be so stricken, deserved a straight up-or-down vote, and those Senators deserve to hav those thumbs cut off in 2014.

Here’s the result of the vote, and attendant protest, via C-Span2:

Update: The woman who yelled “Shame on you!” was Patricia Maisch, the woman who helped to disarm Tucson shooter Jared Loughner. She was escorted from the Capitol, over the disruption, by the Capitol Police.