Would You Spend $1,732.68 On Burner Phones Just to Have An Affair? AL’s Governor Might Have 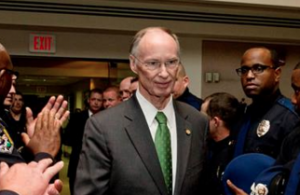 In modern American society, infidelity is still largely looked down on, which is why it gets so much news coverage whenever prominent people are accused of it. It is widely considered to be reprehensible. It is bad. That being said, if reports are at all accurate, Alabama’s governor, Robert Bentley, sure knows how to commit to doing a bad thing really well. (Well, at least describing doing bad thing really well.) The guy dropped $1,732.68 on burner phones to talk to his thang on the side in 2015, according to records.

If you’ll recall, about a week and a half ago, Bentley had some very private audio released. In it, he was heard telling his political advisor Rebekah Mason how much he enjoyed standing behind her and fondling her. He denied ever having a physical relationship with Mason, who has been described as having so much influence over him that she is the “de-facto governor.”

Yesterday, AL.com reported that Best Buy employees in Tuscaloosa confirmed Bentley had been buying burner phones in 2015, but today, they actually dug up his campaign’s finance reports. Did I say campaign? I meant cam-pain, because this has got to hurt.

Here’s what they said about the numerous $15 flip phones he bought:

Bentley’s principal campaign committee spent the $1,732.68 on June 2, stating in a campaign finance filing that the money was used for “reimbursement for cell phones and prepaid wireless purchased at Best Buy on 05/09/15 and 05/30/15.”

So all the phones were bought in a little over three weeks. Colleagues of Bentley’s have spoken out to insist that he just prefers to conduct all of his business by text.

The previously-released audio is now being said to have been recorded by his now-ex-wife, Dianne Bentley, so interpret that as you will.