Wow, Chris Brown Is, Like, A Total Douche (Updated)
video

Wow, Chris Brown Is, Like, A Total Douche (Updated) 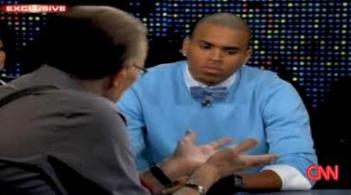 Larry King‘s pre-taped exclusive interview with Rihanna-beating Chris Brown is in the can, and CNN has released a short preview ahead of its Wednesday night premiere.

And despite what had to have been heavy coaching, the disgraced pop star comes off looking like a bigger douchebag than before.

Wearing a ridiculous powder blue bowtie and big bling in his ears, Brown is flanked by his mother and his celebu-lawyer Mark Geragos. For some reason, the decision was conveyed for him to express his remorse by claiming he doesn’t remember what happened.

And if he had a pre-planned script for the appearance, he went rogue pretty early on. Here’s an actual transcript of one of his answers:

You don’t know what to think, Chris Brown? Really? How about ‘I need help, because I just beat my girlfriend to the point where her face looked like this.’

Over on the Larry King Live blog, the comments are largely, and predictably, anti-Brown. There are those big fans, whose misspelled statements of love for the star show the often incomprehensible truth of our overly forgiving nation – and the powerful cult of celebrity.

Of course, this is just one minute of a lengthy interview, but King provides a generally welcome forum for a person to clear the air and begin the process of rescuing an image. It doesn’t appear like Brown was ready to step up (as he proved last month as well).

> Update: GossipCop.com has proof Brown seemed to have no problem remembering the night in question in an earlier interview. And now Brown is speaking out about CNN’s editing.