“Crooked” Hillary Clinton and the Democrats have finally settled on the best possible retort to Donald Trump: “Dangerous Donald.”

A DNC spokesman blasted Trump for “just spouting nonsense he reads on the Internet or in the tabloids.” Dubbing him “Dangerous Donald,” the DNC official said Trump “lacks the judgment and temperament to serve as president.”

Oh god, just got a bunch of DNC emails about "Dangerous Donald." It's really happening.

This is the nickname they came up with. “Dangerous Donald.” At least “Crooked Hillary” and “Lyin’ Ted” have an edge to them. “Dangerous Donald” sounds like a kid who grew up on the wrong side of the tracks that your parents don’t want you hanging out with.

Naturally, the mockery came pouring in:

trump: “what are they calling me?”

All Trump has to do is put on this hat and say "ooo I'm Dangerous Donald the scary man" to completely own Democrats right now.

how long did it take and how many people were involved in coming up with "Dangerous Donald”? I really want to know.

Reminder: the same DNC that came up with "Dangerous Donald" does not have viable candidates recruited for many now-possible House districts.

Dangerous Donald is a rhetorical masterstroke. The American people need to understand what a threat he is to our wildly popular status quo.

Democrats' "Dangerous Donald" (attempted) meme will backfire spectacularly. It's like they're trying to lose.

Trump is, in part, a reaction to the increase in humorless scolding in our society.

I think the problem with "Dangerous Donald" is nicknames should be fun. Fine to say "Trump is dangerous," but for a nickname you need humor.

But at least they’re not trying out other eye roll-worthy slogans online, right? 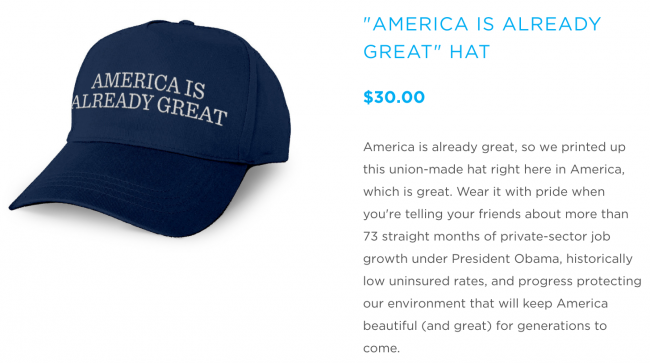 HOW ARE YOU SO BAD AT THIS.