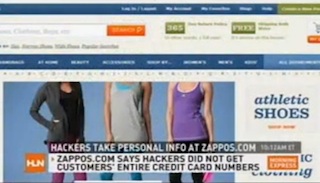 As bad as, say, a news outlet being made to tweet racist and homophobic comments is, it would seem that a much more serious bit of hacking occurred recently. Yesterday, Zappos.com, the incredibly popular online shoe retail site, was forced to email its 24 million customers and break the worst news consumers can hear; their personal information has been compromised.

The email explained to customers just what had happened.

We are writing to let you know that there may have been illegal and unauthorized access to some of your customer account information on Zappos.com, including one or more of the following: your name, e-mail address, billing and shipping addresses, phone number, the last four digits of your credit card number (the standard information you find on receipts), and/or your cryptographically scrambled password (but not your actual password).

The database that stores your critical credit card and other payment data was NOT affected or accessed.”

It continued by informing them how to change their passwords and linking to an instructional webpage with further information. The final part of the email gives some idea of the size of the problem as the website informs its users that they have been forced to shut down their telephone services and only respond by email. The reason? Since all of their customers were affected, there would be no way to handle how many calls their help lines may receive. The email points out that, if only 5% call, that would still be over a million calls.

Still, this hacking isn’t as bad as the worst hacking of the year; the Playstation Network hack from last April in which there was the possibility that 77 million users were affected.

Watch a news report on the hacking from HLN below: