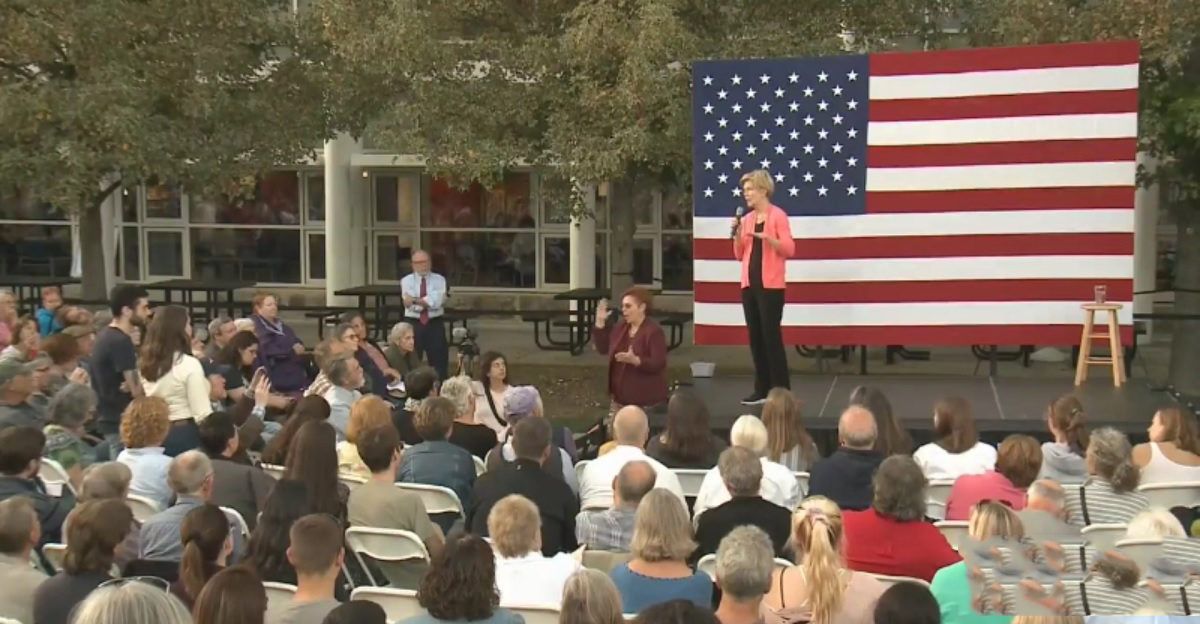 Massachusetts Senator Elizabeth Warren once said “I’m with Bernie” on healthcare, but since then she’s been sending not-so-subtle signals that she’s preparing to pivot away from the Bernie Sanders “Medicare for All” plan, which she now calls a “framework.”

At a campaign event in New Hampshire Wednesday night, Warren was asked about potential debts in coverage during the Medicare for all transition., And the part of her answer that got a lot of attention was her remark that Medicare for All was a “framework.”

But the full exchange contains many more such signals that the Sanders plan is not where Warren is going to land when all’s said and done.

An audience member named Dylan told Warren that he had been denied Medicare because his multiple sclerosis wasn’t considered a sufficient disability to qualify him and that he had also experienced a gap in his private insurance that wound up harming him medically.

“During the transition, it says over the first year people with disabilities will be covered, will it be easier than the current disabilities standards, and basically make it easier?” he asked Warren.

“Right now what we’ve got in Medicare for All is a framework, and it doesn’t have the details, and you’re right to be asking,” Warren said, but then launched into a lengthy excoriation of private insurance that included the promise that every doctor and specialist will be covered — which the Sanders plan does not guarantee — and that no medical service or prescription will ever be denied, which is also not a feature of Sanders’ plan.

Warren concluded with “a brief pitch on Medicare for All” that she described as “the basic idea behind it,” but in which she acknowledged “We’ve got a lot of work to do on it.”

This isn’t the first time that Warren has signaled a pivot away from Sanders on Medicare for All since declaring “I’m with Bernie” back in June.

As health policy expert Charles Gaba has noted, Warren has been squishy on the Sanders plan for a long time, and as recently as this month, following the last debate, said: “I support a lot of plans.”

Elizabeth Warren Getting Ready to Stab Medicare For All in the Back? ‘I Support A Lot Of Plans’
h/t @charles_gaba https://t.co/ylULlIvLKq pic.twitter.com/hZGnZn5aAt

This has become a source of consternation for Sanders supporters, but for people who recognize the legitimate objections that could sink M4A in a general election, Warren’s willingness to pivot is a welcome sign. Warren’s “basic statement of our values” leaves room for pretty much every other Democratic candidate’s health care plan, be it “Medicare for America” or “Medicare for All Who Want It” or “a public health insurance option like Medicare.”

The problem is, nobody knows what Warren is pivoting to, and what she’s describing now is a plan that is more impossible than Bernie’s. Somehow, it will cover every doctor, no medical service will ever be denied, no prescription will go unfilled, no one’s coverage will be disrupted in the transition, everyone’s costs will go down, and by the way, everyone who gets health care as part of their compensation now will get a “cash equivalent” or something, as Warren told the next questioner.

The question was about unions, but Warren appears to be saying that everyone who has negotiated health care as part of their compensation needs to “be made whole,” and she proposes changing the law to do it. Sanders has only made that promise to unions and hasn’t made it clear how he’ll accomplish that.

For now, it seems Warren is keeping her options open so she can promise away every objection to Medicare for All, but eventually, she’s going to have to choose between pissing off the Bernie people with a plan that over-promises and becomes politically toxic under light scrutiny, or pissing them off with a plan that offers universal coverage while constraining cost to the government and preserving choice for consumers.

All current evidence points to the former, but if Warren had listened more carefully to Dylan, she might consider the latter.

Medicare for All purists like Bernie Sanders wave away objections to the plan as quirks in poll questions or ignorance of the plan’s awesomeness or by insisting that people “don’t love their insurance companies,” which is an assertion that nobody anywhere has ever made.

But the 150 million Americans who get insurance through their employer are overwhelmingly satisfied with their insurance coverage, for a variety of reasons. Those employees pay an average of just over $1400 a year in premiums, while their employers pay more than 5 grand. And those people pay an average of $800 per year in out-of-pocket costs — deductibles, copays, and coinsurance. That’s a hell of a lot less than the tax hike that Bernie Sanders has pitched.

Part of the reason for this is that people who are relatively healthy don’t have the utilization that others do, and there’s no guarantee that will always be true. And most people would agree that it would be better not to have to worry about losing your health care when you lose your job. And leaving people to die who aren’t this fortunate isn’t acceptable, either. But those cost discrepancies can’t be waved away.

It’s possible that Warren and Sanders aren’t even aware of what health care costs for people with employer-sponsored plans, because the focus of health care reform is rightly on those who are without insurance or are at the mercy of an individual insurance market with no incentive to compete for them. But there are 150 million of them, more people than voted in the entire 2016 election.

Dylan’s broad concern is about disruption to the health care system during any transition to Medicare for All, a concern that takes many forms, and which has gone largely unaddressed. What effect will that transition have on the private insurance market and its customers, what will it do to provider participation rates, wait times, hospital closures? Less discussed is the political effect of a lengthy “glide path,” during which every hiccup will be magnified to the benefit of the law’s opponents, just as they were when Obamacare was implemented and Democrats were wiped out in midterms.

But there’s a very important message in Dylan’s specific question that is being badly missed in this debate over health care. Warren focuses on the gap he experienced in his unfeeling and uncaring private health insurance, but Dylan was also let down by an unfeeling and uncaring government bureaucracy that denied him the Medicare plan to which he was arguably entitled.

These are the devil and the deep blue sea between which many Americans feel trapped. Warren and Sanders are right, insurance companies deny claims and services and do their best not to cover expensive prescriptions, and are guided by a profit motive that is starkly immoral.

But they act like the government isn’t every bit as invested in cutting costs as private businesses. The fact is that Medicare denies claims at a higher rate than private insurers, and subject services to medical necessity criteria, just like private insurers. As Dylan’s situation demonstrates, it’s tough to motivate a bureaucracy when a problem arises.

If you have an individual plan or no insurance, you’d be no worse off facing a system like this, but if you have good insurance through a large employer, that insurance company has a powerful incentive to be responsive when you have a problem.

That’s why I favor a plan that would achieve universal coverage, while preserving the choice and the care that tens of millions of Americans are currently happy with, causing minimal disruption, and keeping the cost to the government at a politically sustainable level. It’s not about “protecting health insurance company profits,” it’s about protecting the care that people already get while expanding it to include those who are left out.

The plan that comes closest to these goals is Joe Biden‘s, but as I’ve said before, it needs to cover everyone, not just 97 percent. Under Biden’s plan, the most vulnerable would be covered, the public option would constrain insurance company profits and make affordable coverage available to everyone, and the folks left out would largely be people who make too much money to qualify for subsidies, and just figure they’ll wait until they got sick to buy insurance.

But in order for the system to work, everyone has to be in the pool and contribute to the system that they will undoubtedly need at some point. My solution is simple: anyone who isn’t covered by private insurance or the rest of Biden’s plan would be assessed an income-indexed tax penalty (which the Supreme Court has already found to be constitutional), and that penalty would fund their automatic enrollment in Medicaid. Your “Don’t Tread on Me” types could be offered the choice to pay the penalty and refuse the coverage, but very few people would likely do that.

There’s a very good reason the public option couldn’t pass even with 60 Democrats in the Senate because insurance companies know how that sort of competition would constrain their profits. But along with Obamacare’s mandated benefits and protections, it would have forced them to innovate in order to compete. Democrats should take advantage of the public’s shift on universal health care, and pass a public option plan that also covers every American.

We’ll see if that’s a pivot too far for Elizabeth Warren.