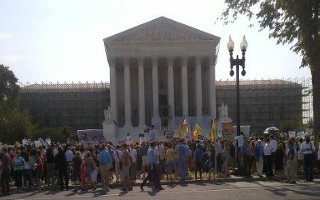 The Supreme Court of the United States has ruled that the individual mandate within the health care reform law, The Patient Protection and Affordable Care Act of 2010, can survive as a tax rather than a mandate. Chief Justice John Roberts has joined the Court’s liberal justices in affirming that the law will stand and authoring the majority decision.

The rest of the health care reform law, otherwise known as “Obamacare,” will remain intact. Roberts decision says that states cannot be penalized by the federal government by limiting the Medicaid funds they receive if they opt not to expand their rolls. This provision was only slightly limited from its original construction in the ACA.

Nothing in our opinion precludes Congress from offering funds under the ACA to expand the availability of health care, and requiring that states accepting such funds comply with the conditions on their use. What Congress is not free to do is to penalize States that choose not to participate in that new program by taking away their existing Medicaid funding.

The individual mandate was upheld as a tax — they found that the federal government could not force individuals to purchase a product, but a penalty could be imposed if they opted not to purchase the product which is, in this case, private health insurance.

The tax provision survived in a 5-4 vote, with Roberts joining the Court’s liberal justices. The perennial swing vote, Justice Anthony Kennedy, read the Court’s dissent along with the Court’s traditionally conservative justices.

After the verdict was announced, Democratic National Committee director Patrick Gaspard tweeted with a measure of mirth, “It’s constitutional, bitches.”

Despite passing Congress, albeit along party-line votes in the House and Senate, the law never became less controversial.

Polls of public opinion on the popularity of the law have shown that health care reform remained persistently polarizing even after its passage. Consistent pluralities or majorities, with rare exceptions, continued to tell pollsters that they favored the repeal of health care reform from 2010 even to today.

The action the Supreme Court has taken today is unlikely to settle arguments that surround the constitutionality of the reform of America’s health care system.