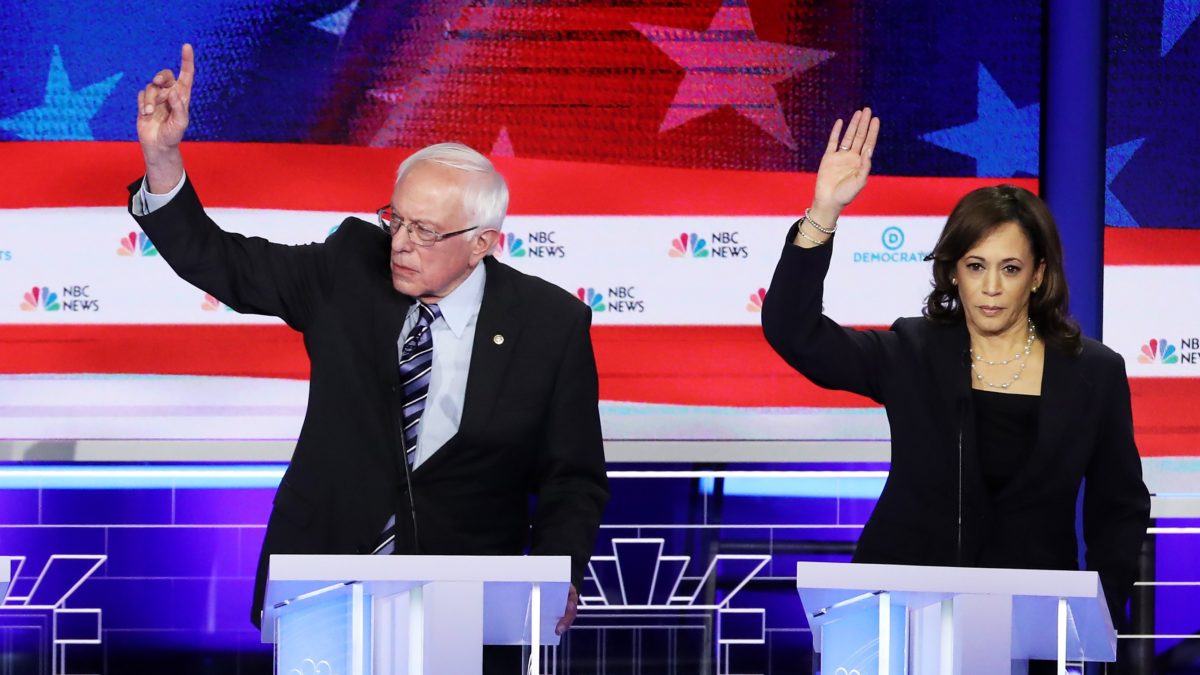 Independent Vermont Senator and Democratic presidential candidate Bernie Sanders’ Medicare for All plan has become perhaps the most defining issue of the 2020 campaign, and while the policy has been a blessing in many ways, it could soon become a curse for a candidate like California Senator Kamala Harris.

It has become an article of faith among liberals that Medicare for All is the best way to achieve universal health care, and that all other proposals are cowardly attempts at political triangulation and/or corrupt giveaways to moneyed interests. This is exactly how I felt until relatively recently, but I have come to believe otherwise.

Before I get to that, though, let’s look at what’s good about Bernie Sanders’ Medicare for All plan.

The Good: It covers everyone.

The minimum basic standard for any health care plan must be that it covers everyone, full stop. As Bernie Sanders and others have said many times, tens of thousands of people die each year due to a lack of health insurance, so it is grossly immoral to leave anyone out. And even if you’re an unfeeling anti-snowflake, there are practical reasons to cover everyone, as well. The financial and human cost of uncompensated emergency care is just one, but covering everyone also spreads the risks and the costs more equitably.

Medicare for All completely shifted the debate.

This could be the greatest achievement of Bernie Sanders’ career, because prior to 2016, truly universal coverage was some faraway North Star. When Sanders entered the race in 2016, Hillary Clinton was offering improvements to Obamacare that would not have covered everyone, and was campaigning against Sanders’ universal coverage proposal. Over the course of the campaign, though, she embraced a public option and a massive expansion of Medicare that came much closer to universal coverage.

Unlike the current Medicare program, Sanders’ M4A will cover dental care, vision care, and hearing aids, and will eliminate deductibles, copays, and coinsurance.

Medicare for All is terrific branding.

Poll after poll finds overwhelming support for a national health plan called Medicare for All, and it is an undeniably catchy and simple way to capture the idea of universal health care by co-opting an already popular existing program.

Medicare for All saves money, maybe.

There’s been tremendous debate over whether Sanders’ plan saves $2 trillion over ten years or it doesn’t, but administrative costs would be lower, and out-of-pocket expenses for most Americans would also go down. But even if it costs more, the fact that 44,000 people a year will no longer die makes it kinda worth it.

But there are significant disadvantages to Medicare for All that are already becoming evident during the Democratic primary, and will only become magnified in the general election. Before breaking down the political and substantive problems with the plan, though, it’s worth considering how little difference there is between the two categories. Even if Medicare for All is substantively the best idea, what is the value of that idea if it can be made so politically toxic that it never becomes law, and maybe sinks your entire agenda? Is it worth the risk?

If Medicare for All were the only way to save those 44,000 lives per year, I’d say yes, it’s worth the risk, but it isn’t, and it’s not even the best way.

That said, here are the political problems with Medicare for All.

Support for Medicare for All evaporates under mild follow up questioning.

Numerous polls have shown that majority support for single payer plans quickly becomes majority opposition in the face of opposing arguments, particularly when they learn that Medicare for All would abolish private health insurance.

Medicare for All is easy to attack.

This is similar to my first point, but also distinct. Anyone who remembers the rollout of Obamacare will remember how the mainstream media abetted Republicans in rat-intercoursing the policy with false or misleading stories about alleged “victims” of the program and cancellations that weren’t actually cancellations.

This time around will be no different, except that critics of M4A actually have some legs to stand on. The plan will face false and misleading attacks that will be amplified ad nauseam, but will also face criticism that will be accurate and resonant.

Medicare for All has a yuge price tag.

Hillary Clinton attacked Sanders over the plan’s $32 trillion price tag in 2016, and while proponents correctly point out that it does not take into account the savings that Americans will achieve by not paying premiums or deductibles or copays, it’s catnip for opponents of the plan, and for the media. Thankfully, this can become an advantage for any Democrat proposing a truly universal plan that costs less than $32 trillion. Sanders’ plan has softened the ground for spending on health care.

Democrats are already misleading voters about Medicare for All, intentionally or not.

One resonant attack on M4A is that it will “abolish private health insurance,” a thing that is unquestionably true, and yet has been met with painfully awful denials from some candidates. Both Bernie Sanders and Kamala Harris have pushed back at this by claiming that people will still be able to purchase “supplemental” insurance, which is a bit like saying if McDonald’s were abolished, people could still buy drive-thru foie gras. It’s not remotely the same thing, and it doesn’t exist.

Warren, to my knowledge, has not resorted to this talking point, and Sanders has made no bones about getting rid of insurance companies, which makes you wonder why he brings it up at all. But Senator Harris, who has been my favorite candidate in the field for a long time, has stumbled over it repeatedly.

At a CNN town hall in May, Harris seemed to say she favored getting rid of private health insurance, only to try and clean it up a few days later by playing the “supplemental insurance” card.

And after last week’s debate, when Harris raised her hand when asked “Who here would abolish their private health insurance in favor of a government run plan?”, she was cleaning it up again the next morning on Morning Joe. Harris said that she had misunderstood the question, which, in her defense, was very poorly-worded.

But she also said “I am a proponent of Medicare for all. Private insurance will exist for supplemental coverage.”

That clip also illustrates the rat-intercoursery M4A will face, in the form of Joe Scarborough claiming it will “take away 180 million people’s health insurance,” rather than replace it with more comprehensive coverage.

But more importantly, it shows how Sanders is kneecapping his own policy by promoting this talking point, which Harris has now adopted.

Right now, insurance companies do sell “supplemental” policies that pay out-of-pocket costs that Medicare or other plans don’t cover, but under M4A, those plans will be unnecessary because Sanders’ plan covers everything. And even those plans aren’t considered “private health insurance plans” by any commonly understood meaning of the phrase, which is why they’re in the distinct category of “supplemental” plans.

To put it charitably, this talking point is very misleading, and no Democrat should be using it. Less charitable opponents will call it a lie, and will have a persuasive case that it is.

Sanders has also been running around telling a clear and infamous lie by saying that under M4A, you can keep your doctor. That’s not even true now, but Sanders has no way of knowing how passage of his bill would affect doctors’ participation in Medicare.

Even if M4A were perfect in every other respect, the political difficulty in defending it would be serious reason for concern. Bernie Sanders’ plan to beat back opposition to the plan, as he told Chuck Todd in 2017, is to have NBC and CBS and ABC give him an hour to explain it.

Good luck with that, especially when you have to explain why you lied about keeping your doctor and abolishing private insurance.

Finally, there are substantive problems with M4A, many of which are related to the political ones, and all of which are solvable.

The fact is that Americans who have private health insurance are overwhelmingly satisfied with it, which makes abolishing it a problem. Many M4A proponents wave this away for a variety of reasons, as Sanders did recently at the debate. In arguing with a very shouty Michael Bennett (I like to think of him as “Moulton #5,” Lou Bega-style), Sanders claimed that “People don’t like their private insurance companies, they like their doctors and hospitals,” and again falsely claimed that “Under our plan people go to any doctor they want, any hospital they want.”

But many Americans who receive health insurance through employers, particularly large employers and unions, also prize their health coverage as part of their compensation.

Large group plans are able to absorb risky patients, mostly because they have no choice, and the reward of the large pool of customers is worth it. No large employer, public or private, is going to be OK with having their employees thrown off their coverage, especially if another company is willing to step in and take the money without being evil.

While competing for those dollars, private companies are also good at negotiating and maintaining extensive provider networks for a variety of plans, and in turn leveraging those plans to secure provider participation.

Doctors are more likely to take patients for a lower-cost product if it also gives them access to higher-priced patients as well. Private companies are also likely to be more responsive to a patient who’s in a large group than to someone on the individual market, and more responsive than an overwhelmed government bureaucrat, as well. When a big contract is at stake, everybody listens more closely.

There are ways to preserve what’s good about private insurance while also covering everyone, but the first step is admitting that there are good reasons for people to like their private health insurance.

Medicare for All will be tremendously disruptive.

This, again, sounds to many liberals like fearmongering over disruptions that will totally be worth it, but the threat is very real. Even if everything goes perfectly after the M4A four-year “glide path,” does anyone know what will happen to health insurance company stocks the day after the law is signed, or how that will affect their ability to pay claims during that glide path? And what will happen to the 2.5 million people who work in the health insurance industry?

If things don’t go perfectly, there could be longer wait times, provider participation rates could plummet, and once the switch is flipped, there’s no going back.

Medicare for All is too cheap.

John Delaney has raised the issue of Medicare’s low provider reimbursement rates, which are currently supplemented by the higher rates that private insurance pays. That means that unless Medicare significantly increases those rates — and consequently the M4A price tag — provider participation rates could plummet.

Fortunately, none of these risks are necessary. There are several plans that offer universal coverage, while preserving as much of the current system as possible. Medicare for America is one option, but any of these plans would help constrain health insurance profits, while forcing the companies to innovate in order to compete with the government plans.

Warren’s strength is her policy ideas, and she’s so enmeshed with Medicare for All that it’s unlikely she would or could shift very much on the issue. But Harris’ meteoric surge following her debate performance suggests that voters like her fighting skills. It’s plenty early enough in this process for her to course-correct on this issue.