Tanks, and the Media’s Fanatical Dedication to Hysteria
Opinion

Tanks, and the Media’s Fanatical Dedication to Hysteria 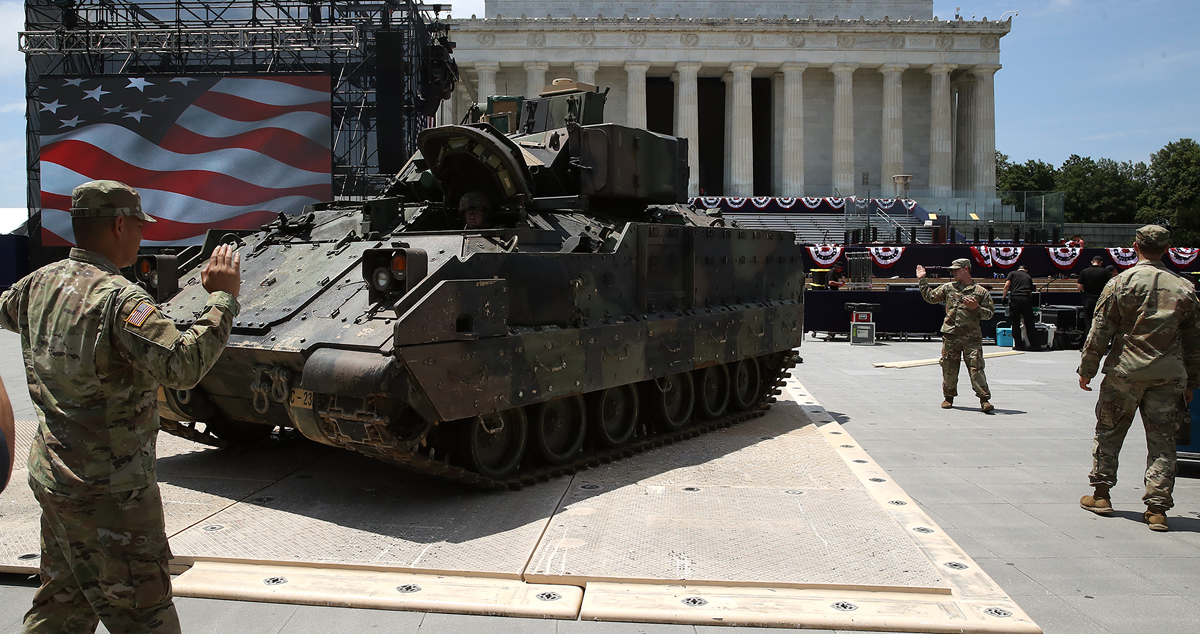 Democrats this week are having a field day, so to speak, over the news that tanks that will be on display on the Fourth of July. The worriers are positively gasped out, and have no more “well I never” left in the bank, over a day out from the event. The Trump plan to roll and fly military assets on the date of American Independence from a foreign power is the symbol of everything wrong with America right now, is the basic gist of the objection.

The American press, naturally, can find no fault in that position. As is the norm, they simply repeat the Democrats’ concerns and debate the manner or extent to which everyone should be terrified. The central premise, that this is bad and that you should be terrified, is mostly unchallenged.

But why? What is so bad about tanks?

MSNBC’s Joy Reid thinks that it’s different when Trump does it than when, say, the French do it, because Bastille Day represents the throwing off of tyranny. Does our Independence Day not represent the same thing?

Hawaiian Senator Brian Schatz said that there is “nothing patriotic” about “tanks in the streets.”

On social media politicians and members of the press alike have gravely and dramatically marked the process, obviously believing they are contributing to posterity with maudlin observations about tanks “rolling” into D.C. or “occupying” American streets.

When anti-Trump conservative writer David French observed on Twitter that tanks are cool and displays of military gear are popular and traditional in America, he was dragged to hell and back by overwrought liberals, including from the press, for enabling the would-be dictator. Never mind his voluminous record of opposition to Trump’s every fascistic or tyrannical impulse or overture.

The cable networks are eating it up. MSNBC, obviously, sees the advent of fascist occupation and perhaps a military crackdown on the so-called #Resistance. On CNN, they have made an issue of every Democrat talking point, from it being “potentially illegal” to arguing the expense of moving tanks in for the celebration is “wasteful” (presumably, unlike the wise and prudent expense of fireworks), to having guests on who say it isn’t a representation of “liberty”, and on and on. April Ryan appearing this afternoon said that the money should have been spent on “homeless veterans.” No one suggested to her that every president spends money on this celebration, rather than the homeless.

Like Joy Reid on MSNBC, they even brought up France’s Bastille Day and mocked the idea of comparing the U.S. showing off the military with France doing so.

For days, especially today, CNN has brought on guests who said the Trump tank idea is a show of his insecurity that shouldn’t be indulged, or who questioned the implications of tanks in D.C. They’ve worried about the physical infrastructure and even whether bridges can support the weight of a tanks, something the New York Times also wrote about.

The tanks story, always as a negative, made for 16 different segments of air time on CNN on Wednesday alone. And that’s only counting before 4:30 in the afternoon. There is still prime time to go.

And don’t let’s forget that also in the news are Nike pulling a shoe that was offensive because of the American flag and, of course, Democrats quintupling down on calling American detention centers “concentration camps.” These characterizations, too, meet either small criticism or none from the press.

The fact that they are feeding the outrage cycle should be manifestly obvious to anyone, at this point. It’s a quiet week for traffic and ratings, thanks to the very holiday about which so much fear-mongering is being stirred. It’s a story that is tailor-made for CNN, the Trump outrage network, because it is the perfect Trump story.

When Donald Trump does something, be it dumb, meaningless, genuinely despicable, or merely different from what’s been done before, there is a mad rush to explain how and why it’s the absolute worst thing. And CNN is there to make sure you hear about it. About that part. That it’s the worst. That’s their ratings. They fill the airwaves with ghosts of tyrants and specters of looming tank attacks, and the stories almost always disappear for other, fresher, more outragey news.

The press can’t see when they are like this. They think to themselves, and would again if they read this criticism (or any criticism), that since Trump does like dictators, and since he does offer paeans to tyrannical exercises of power, then our coverage must be correct and fine.

What an unsubtle and unsophisticated view of their job. It’s almost prosaic in it’s naiveté.

As David French pointed out, most people enjoy a look at military gear and us having a long tradition of it, so they should realize that simply for appearance’s sake, their overwrought coverage of this minor moment that most people will actually appreciate makes them look like they are the loony left rather than journalists.

But more than that, it shows an almost fanatical dedication to hysteria. When even the suggestion that maybe a few tanks and some planes on the Fourth will be cool looking and a chance to appreciate our military results in a pile-on, it’s time for you to ask yourself if you’ve lost perspective. If you’re running videos for the Fourth of July about how America is only so-so, it’s possible you don’t really get the point of the holiday.

This is hysteria. And CNN and the New York Times and MSNBC are not just encouraging it, they’re cashing in on it. Ain’t it noble?