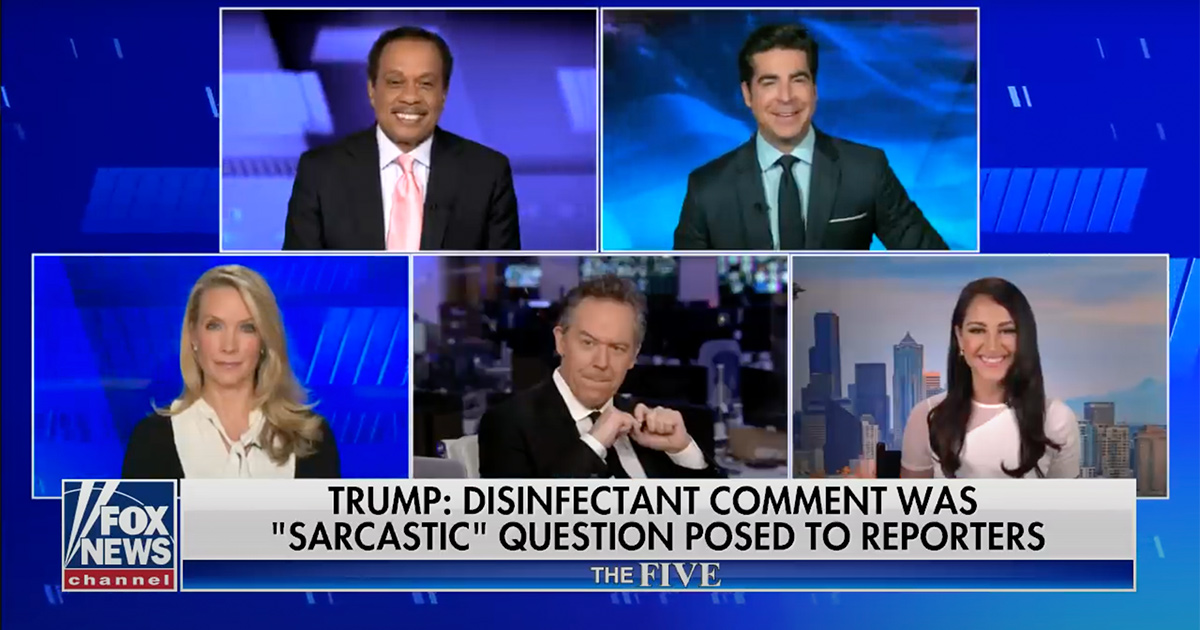 The Five beat all comers in cable news on Friday, while CNN continued its streak of winning daytime ratings in the coveted 25 – 54 age demographics. But every network experienced a bit of ratings hangover on Friday evening as President Donald Trump abruptly cut short his daily White House briefing after just 22 minutes without taking any questions from the press.

Fox News’ 5:00 p.m. hour also coincided with almost the entirety of Trump’s truncated briefing, which ended just after the 6 o’clock hour. In all, The Five pulled in 3.96 million viewers overall, and 580,000 in the demo, far outpacing its time-slot competitors on MSNBC (1.94 million; 296,000) and CNN (2.01 million; 491,000). Side note: The Five even managed to eke out a victory over ESPN’s 7:00 p.m. coverage of Day 2 of the NFL Draft, which hit 3.8 million p2+ viewers. (The second night of the NFL Draft still did a monster number — 8.2 million — across all its live broadcast platforms, which also included ABC, NFL Network, ESPN Deportes, and digital streaming.)

But the absence of Trump briefing — and sparring with — White House reporters on Friday coincided with significantly lower ratings in the 6:00 p.m. and 7:00 p.m. hours compared to Thursday, when the coronavirus briefing ran past 7:30 p.m. Fox News, which has recently enjoyed huge ratings during these briefings, saw its 6:00 p.m. viewer totals drop from 5.08 million overall and 988,000 in the demo to 3.28 million and 505,000 in the demo a day later. Similarly, its 7:00 numbers fell off from 2.97 million P2+ viewers and 579,000 in the demo to 2.40 million and 411,000 on Friday, respectively. MSNBC and CNN also experienced notable, if smaller, ratings dips during these hours, as they were soundly trounced by Fox in these two hours.

One of the most interesting hours of cable news on Friday was the 4:00 afternoon slot, which turned into a bonafide ratings dogfight. CNN’s The Lead with Jake Tapper nosed out a win in the demo with 383,000, but Fox News’ Your World with Neil Cavuto followed closed behind with 323,000 and MSNBC’s Deadline: White House came in third in the demo with 291,000. But in P2+ viewers, the tables were fully turned with MSNBC taking first with 2.20 million, Fox again taking silver with 2.04 million, and CNN trailing with 1.61 million. This kind of tight, three-way ratings race is rare in cable news and definitely bears watching in the future.